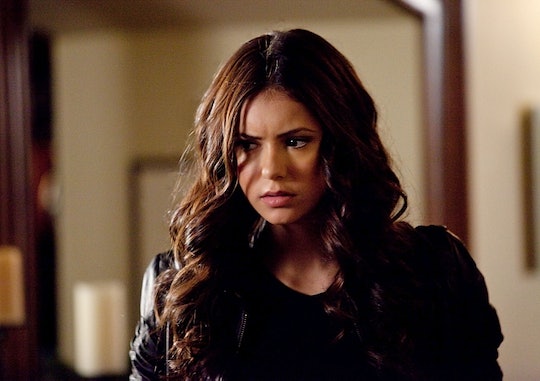 With the end of The Vampire Diaries too close for comfort, fans are more anxious than ever to see a certain someone come back for a final goodbye. I'm referring, of course, to the possibility of Nina Dobrev returning to The Vampire Diaries as the lovable protagonist, Elena Gilbert. After all, it was her character that set this whole series in motion, so it would make sense for her to pop up before it all comes to a close. But in light of Season 8's story arc, I'm beginning to wonder if Dobrev's potential return won't come in some other form. In fact, it's made me start to consider how Katherine could return to The Vampire Diaries Season 8 instead.

Now that the existence of hell has been brought into play — along with the introduction of the devil himself, Cade — you can't help but think back to that time Katherine found herself at death's door and promptly got sucked up into the darkness, never to be heard from again... or so we thought. The sirens have been collecting souls to send down to Cade, which means viewers will probably be taking a trip to the underworld in the very near future. So it's not completely out of the question that we'll get to see some of those poor unfortunate souls (Ursula-style) and Katherine could definitely be one of them. But that's certainly not the only way this could play out.

She Appears In Hell

As I just mentioned, seeing Katherine in hell seems like the most likely option, considering the narrative. Cade may not have been brought into the picture until Season 8, but hell has undoubtedly been around for quite some time. And since Katherine was unable to make it to the Other Side, she probably ended up with him. Sounds like the perfect opportunities for her former Salvatore flames to come in and help her out.

She's Seen In A Flashback

It's not the ideal situation, but TVD is known for its flashback sequences. Maybe Katherine shares some past connection with Cade or the sirens that could help the Mystic Falls gang out in some way. Sybil seems to be a fan of telling stories from long ago. Maybe Katherine will show up in one of them.

She Shows Up In A Dream Sequence

Whether it be a dream or a hallucination, this is another possible way Katherine could return without actually returning. Again, I'm not a huge fan of this option since I'd prefer the real deal rather than relying on someone else's memory or imagination. But I suppose it'd be better than nothing.

But in the end, I don't really care how that it happens — just so long as it does actually happen. The characters deserve a chance to say a proper goodbye to at least one of Dobrev's TVD personas, and quite frankly, so do we.