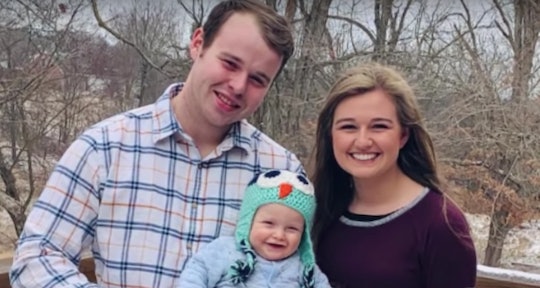 There's another Duggar is on the way, and fans are already so excited. Has anyone else stopped to think about what family parties will look like in a few years if all of the kids keep having families as big as their parents? Well, all the more entertainment for us. In the meantime, Kendra Duggar recently revealed how she told Joseph she's pregnant with their second child and TBH, it was so creative and unique.

The couple made their big announcement via their family's Instagram account earlier this week, as Entertainment Tonight reported. In the picture, Kendra, Joseph, and their son Garrett are all sitting in a field, posing with a big, gold balloon that reads: "baby."

"We are ready to double the fun at our house! Being parents has already proven to be a greater joy than we had hoped or imagined," the couple wrote in a joint statement. "We love getting to parent together and are loving every moment and milestone. We are very happy that our little family will welcome a new addition later this year. Children really are a blessing from God!"

In a video they recorded exclusively for the announcement, Joe went on to say how Kendra told him the news in a really creative way. He began, "She just surprised me with the news that we’re expecting. I was really excited. She really surprised me good this time."

Kendra went on to show fans that she actually etched the words "baby, soon" at the bottom of his cereal bowl during breakfast. He got to the bottom, saw the inscription, and found out he was going to be a father again, The Hollywood Gossip reported.

Back in December 2017, Us Weekly reported that the couple was expecting their first child. In a joint statement they released to the magazine, they shared the following about their news:

During this season that we are celebrating the birth of Christ, we are so excited to share with you that we are expecting the gift of a child ourselves! Wow, it’s so exciting! We’ve both always loved children and seen them as a real blessing from God. It’s so surreal to think of being parents and having our own little one. We cannot wait to see this new baby!

The announcement of their newest addition comes just a few weeks after another milestone: the couple made their first official Instagram account together. "We finally decided to get social media! Still trying figure out how it works," they wrote on the first photo posted. "Looking forward to keeping y’all updated on our little family."

A number of Joe's siblings commented on the announcement, sharing their well-wishes. "Congratulations, Joe and Kendra! Our first two are close in age, and I love that they have each other! They’re best friends! Y’alls will be too!" Jessa Seewald said. "Congratulations!!!! Super excited for you guys!" Anna Duggar said.

More fans and followers came out to wish the family the best as they embark on their next phase of parenthood. Fortunately, we'll probably be able to watch it all unfold as they count on (ha, ha) and keep adding to the Duggar brood. In the meantime, we have a new social media account to keep us entertained and up-to-date all the way there.