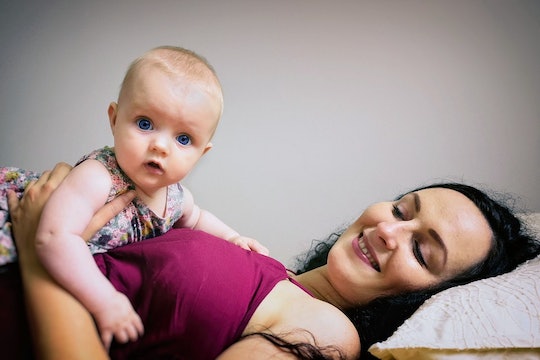 How Kids Are Affected By Life With A Single Mom

While some studies have found that single-parent households run by mothers can make life more stressful for kids and can negatively impact their behavior, new research has shown quite the opposite. A new study compared how kids are affected by life with a single mom who chooses to be a single mom with children who are being raised in a traditional family, with two heterosexual parents. And, despite many horrible, mom-shaming stereotypes, researchers found no differences in the children's well-being.

According to a press release for the study — published by the European Society of Human Reproduction and Embryology on Wednesday — children of single mothers are no more likely to suffer later in life than kids raised by a mother and a father, specifically “in terms of parent-child relationship or child development.”

Researchers from the University of Amsterdam looked at 69 “single-mothers-by-choice," who had knowingly chosen to raise their child alone, according to the study, and compared them with 59 mothers who came from heterosexual two-parent families with a child between the ages of 18 months and 6 years old. Researchers looked at mothers' answers from a set of questionnaires focusing on three areas: Parent-child relationships, mothers' social support network, and their children's well-being.

"Children in both family types are doing well in terms of their well-being," Mathilde Brewaeys, one of the researchers, said in the press release for their findings. "Single-mothers-by-choice and their children benefit from a good social support network, and this should be emphasized in the counseling of women who want to have and raise a child without a partner."

Brewaeys added in the press release that women considering single motherhood through alternative methods, including fertility treatments and adoption should find a "strong social network" that could include brothers, sisters, parents, friends, teachers, family doctors, and neighbors.

According to The Daily Mail, Brewaeys also said there is a difference between the single moms included in this study — because they "knowingly make the decision to raise their child alone" — and unintended single moms, who may have experienced a troubling divorce or conflict in their relationship with the child's father.

"It seems likely that any negative influence on child development depends more on a troubled parent-child relationship and not on the absence of a father," Brewaeys told The Daily Mail.

For example: When a single-parent home is not planned, the stress of it — such as a heavier financial burden and a lower overall household income — can negatively impact a child’s behavior, according to an analysis from LIVESTRONG. But there are also many positive effects for kids raised by single parents, such as a developing stronger bonds and learning to share chores and other responsibilities sooner.

As this latest study, which has an admittedly small sample size, and prior research has shown, any parenting dynamic can influence the way a young person grows up. And single mom or not, there's no right or wrong way to do it.