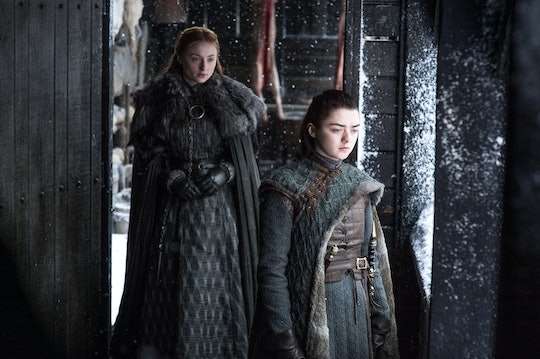 Littlefinger is always up to something, and he was meddling in the north long before he married Sansa off to Ramsay Bolton. His wheels are always spinning, but throughout Season 6 and 7 he seemed particularly interested in keeping Sansa emotionally severed from her siblings, probably to keep her on his side instead of theirs. He tried to feed a nonexistent feud between Jon and Sansa for the northern throne, then in "Eastwatch" attempted to breed conflict between Arya and Sansa with a damning note Sansa wrote long ago. It's got viewers worried about how Littlefinger's note that Arya found on Game of Thrones could impact the Stark sisters.

The letter was written by Sansa back in Season 1 after Ned was arrested for treason. She was still living in King's Landing at the time and engaged to Joffrey; without Ned's protection, she was basically a sitting duck. Cersei (along with Littlefinger, Pycelle, and Varys) manipulated Sansa into writing a letter to Robb that accused Ned of conspiring against Joffrey and urged Robb to swear fealty to Joffrey in order to smooth over relations between their families. The threat was clear: if Sansa didn't do it, her family would suffer. Of course, they ended up suffering anyway.

In many ways, the letter feels like a moot point. Sansa was coerced into writing it out of fear for herself and everyone she loved. While Robb was initially shocked to receive it, Maester Luwin immediately saw through the facade and knew that the words were Cersei's even if Sansa had penned them. The letter is easy to timestamp, too, because it references such specific people and events. A very simple explanation would take care of the whole thing, especially as Sansa has made to clear to Arya now that she has no love for the Lannisters.

Arya isn't stupid. She may have disagreements with Sansa and jump to the wrong conclusions, but she knows Littlefinger is not to be trusted. His machinations are not as subtle as he thinks they are, either, and that letter was clearly something he wanted Arya to find. While it may cause an immediate disagreement between the sisters if Arya overreacts before learning the truth, it would be easy to clear things up.

Plus, if Arya doesn't believe Sansa, then she could just have Bran take a look on the World Wide Weir for the truth. He knows everything there is to know, so he could probably set things straight fairly easily.