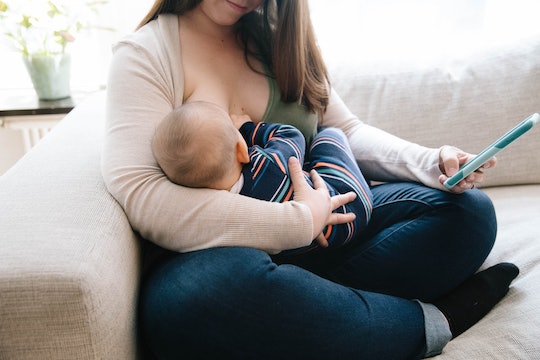 I don't know about you, darling pregnant woman who probably needs a drink something fierce because OMG pregnancy is rough, but the common response I received whenever I asked about drinking postpartum was, of course, to wait. That's not really the answer anyone wants to hear, but if you're wondering how long after drinking should you wait to breastfeed, it's probably the answer you need to hear. Then again, every other and baby and nursing relationship is different, so answering the "What's the deal with breastfeeding and drinking?" question isn't as easy as you would think. he answer.

La Leche League International reminds all breastfeeding moms that there are a few things to consider when weighing the pros and cons of drinking when you're breastfeeding. For example, think about how much alcohol you plan on ingesting, the baby's weight, the mother's weight, and the length of time between the last drink you've enjoyed and your baby's feeding. The biggest concern, of course, is how much alcohol actually gets into your breast milk and, in turn, is ingested by your baby.

La Leche League says the "adult metabolism of alcohol is approximately 1 ounce in three hours," and your newborn can metabolize alcohol at about half the rate. This means it can take 3-4 hours for one serving of alcohol (a glass of wine or one beer) to leave a woman's system when she weighs approximately 120 pounds, and up to 13 hours if it's a high-content alcoholic drink or/or multiple servings have been ingested.

Catherine Herway, MD, assistant director of maternal fetal medicine at Staten Island University Hospital, told Health when alcohol is present in the milk supply, babies have been shown to drink less, so their growth can be arrested and a mother's milk supply can be negatively affected. Beth Conover, a nurse practitioner at the University of Nebraska Medical Center in Omaha and a member of the board of directors of MotherToBaby, told Health, "Mothers of newborns less than 3 months old should be extra careful about drinking, as a baby's brain is still developing and very vulnerable." Still, the American Academy of Pediatrics (APA) says that when intake is limited, occasionally drinking while breastfeeding is perfectly safe. The APA goes on to explain, saying:

"Ingestion of alcoholic beverages should be minimized and limited to an occasional intake but no more than 0.5 g alcohol per kg body weight, which for a 60 kg mother is approximately 2 oz liquor, 8 oz wine, or 2 beers. Nursing should take place 2 hours or longer after the alcohol intake to minimize its concentration in the ingested milk.”

KellyMom reminds mothers that current research "that occasional use of alcohol (1-2 drinks) does not appear to be harmful to the nursing baby." KellyMom also says many experts, "recommend against drinking more than 1-2 drinks per week," and remind breastfeeding moms that pumping and dumping is not necessary.

Consuming large amounts of alcohol, or indulging in extreme, prolonged use of alcohol, is another story, though. Chronic drinkers shouldn't breastfeed, as it can cause agitation and disruptive sleep patterns in babies, as noted in National Institute of Alcohol Abuse and Alcoholism's study on the effects of alcohol and lactation. The institute also states that an infant's gross motor skill are altered by the ingestion of prolonged breast milk that's been exposed to alcohol.

The bottom line is, if you're going to have a drink and you're nursing, allow considerable time to pass before breastfeeding, just in case. The APA suggests at least a two-hour window to be sure all the remnants of alcohol have left the milk supply, though if you don't quite make the time requirement, or fall short slightly and didn't consume a ton of alcohol, take it easy on yourself. When you're feeling like yourself, neurologically, your blood-alcohol level has probably resumed a normal state and you can safely resume breastfeeding. If, however, you're woozy, dizzy, or suffer an side effects that drinking might cause, wait a little longer.