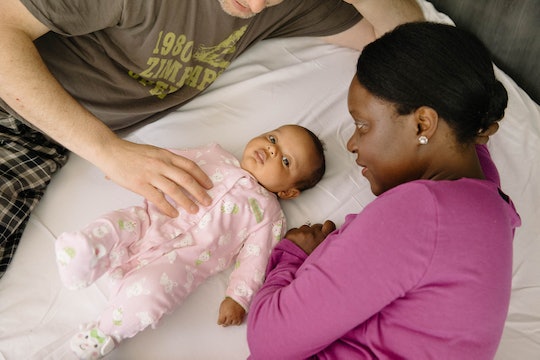 When I came home from the hospital with my newborn son, I was happy to see that my bleeding had lightened considerably in the few days since I delivered. Naively, I thought this meant it would continue to get lighter and that I would be happily bloodless in a week. Imagine how chipper my attitude was when, five weeks later I was still bleeding. Thankfully, it wasn't heavy enough to worry me, but definitely enough to still require a pad. Am I an exceptional case or is this normal? How long after giving birth should you stop bleeding?

According to the American Pregnancy Association (APA), post-delivery bleeding is not just a result of a vaginal birth, but happens after Cesarean sections as well. The bleeding is called "lochia" and is a result of your uterus shrinking from the size of a watermelon back down to its pre-pregnancy size of a pear.

According to the APA, lochia may continue for up to six weeks postpartum and still fall under the realm of what is considered normal. Some women experience much less and others, like myself, may begin to doubt it will ever actually end.

Birth doula Darby Morris, founder of Sweetbay Doula, tells Romper that after a normal birth postpartum bleeding should more or less always be declining, however slowly, as time goes by. Deliveries that involve hemorrhaging or the placenta getting stuck are handled differently, she explains, but women who have just experienced an uncomplicated childbirth will find their bleeding easily managed by a sanitary pad. Hospitals will not let you leave if bleeding poses too great a risk.

"When I visit or talk with families within the first week, one of the danger signs I am looking for is whether the mother is bleeding through a pad in an hour," Morris tells Romper. "If this is the case, I strongly advise them to return to the hospital."

Sometimes the bleeding appears to increase after a few days of lightening up (which, speaking from my own experience, can be really frustrating). You thought you were almost in the clear, only to dig the heavy pads out of the closet again. So what gives?

According to the Mayo Clinic, it's normal for your bleeding to increase when you come home from the hospital because you have just exerted more energy than ever since delivery. Similarly, increased lochia at any point in the first six weeks postpartum may be a signal that you're overextending yourself.

Lactation Consultant Sara-Chana Silverstein says there is another, lesser known element of postpartum bleeding that recovering mothers should know. The "eight week breastfeeding bleed" can actually happen anywhere between eight and 11 weeks and is often mistaken for a woman's period returning. Silverstein explains to Romper that the uterus has been sitting low in the abdomen and is moving back to a higher location. "Women freak out, thinking it is their period," she explains. "I teach my clients this is normal and healthy for their body."

Note to self as I round the corner into my ninth week postpartum: If my period seems to return, it's not necessarily time to lament. In fact, many women who exclusively breastfeed enjoy a menstruation-free existence for six glorious months.

Deciphering signs and symptoms postpartum can be tricky, but lingering mild bleeding for several weeks is not cause for alarm. On the other hand, if you completely soak a pad in an hour, get yourself to bed to rest. If the bleeding continues at that rate or if you pass blood clots larger than golf balls, call your provider ASAP.