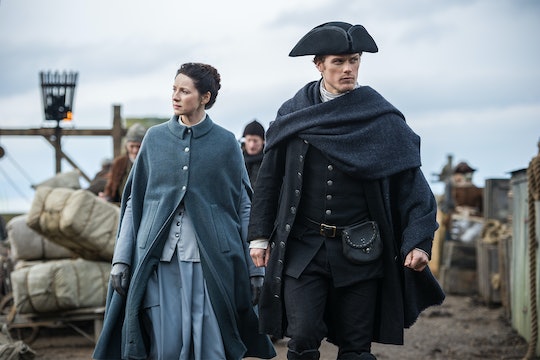 It seems almost too cruel to believe. After five long episodes of Jamie and Claire living separate lives, they finally got back together. Except now, they've managed to find themselves apart again. Will the torture never end? How long are Jamie and Claire separated on Outlander? God willing they won't stay far from each other for long. Sure, people come to Outlander for the historical drama, the costumes, Caitriona Balfe's concerned face, and Sam Heughan's rippling pectorals. But let's be honest with one another here. What we all really love about the show is the love story between Jamie and Claire. With them apart, all we've got now is a deck full of vomiting and moaning sailors who will probably all be dead soon.

Because Claire took an oath and because she is sometimes a little too nice for her own good, she felt it was her duty to actually board the British man-o-war filled with sailors dying of typhoid fever. There's not much she can actually do for them beyond teaching them how to wash their hands and make sure they remain quarantined, but go she does in any case, despite Jamie's objections. And of course, just as she's in the midst of trying to get the ship's cook to stop for a second and listen to her, they set sail, away from the Artemis and away from Jamie. So that sucks. Warning: book spoilers ahead!

But having read the books, I know what happens next. The real question is how many episodes it's going to take the show to get back to the interesting part of their journey. In Voyager, the book version of this story, Claire is stuck on the ship for a while. As the captain informed her, it is also bound for Jamaica, and he has sent word with the other captain that Claire and Jamie will be reunited once they all reach the port. So just a few days (maybe months) of delay, and all will be right in the world again, right? Actually, no.

In fact, several episodes' worth of things happen before Claire and Jamie reunite in this version of events. One major revelation is that Lord John Grey (you'll remember him, of course) is aboard the Porpoise with Claire. He is to be the new governor of Jamaica. Small world, right? The other big thing is that the captain knows who Jamie is. Claire finds that the captain recorded Jamie's identity and criminal record in the log book, so when they reach Jamaica, Jamie will be arrested and then hanged. In order to avoid this, Claire, for a reason that still escapes me, decides to escape the ship. Once they're close to land, she jumps overboard and lets the current carry her to shore. Good plan!

Claire manages to survive the jungle by sleeping in a tree and meeting a nice naturalist named Lawrence Stern, who takes her to stay with his insane, pot-smoking friends. Finally Jamie, who has learned of her escape, finds her in the middle of the jungle. This is a lot of story to cover in a single episode.

The fact of the matter is that there are only four episodes left to go of Outlander, during which the book provides a ton, and I mean a ton of plot. There are new characters, a murder mystery, long-lost friends, tropical storms, and witchcraft to dive into. With all of this still left to cover, I somehow have a feeling that Claire's adventure aboard the Porpoise will be cut somewhat short. Personally, I kind of hope the Lawrence Stern episode gets cut altogether. The good news is that with all of this action still to come, I doubt the show will keep the lovers apart for more than an episode. I hope.