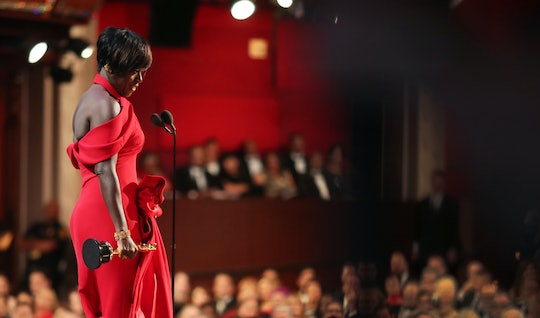 It's finally time for the 2018 Oscars, but you should prepare yourself for a long evening. Between the red carpet pre-show, a sometimes lavish opening monologue, and handing out all the awards, the Oscars tend to take up a huge chunk of your evening. But how long are the 2018 Oscars, exactly?

You can start getting Oscars coverage as early as 5 p.m. EST with E! Live From the Red Carpet, which will air on E! and on the E! News app. The show will air from 5 p.m. to 7 p.m. and then at 7 p.m. the red carpet footage will continue with the Red Carpet Rundown from 7 p.m. to 8 p.m. EST. If you'd prefer to watch everything on one channel, ABC will begin Oscars coverage with the Oscars Opening Ceremony at 6:30 p.m. EST. That will run all the way through to the actual awards show, which is scheduled to air from 8 p.m. to 11 p.m. EST on ABC. However it's been known to run over so make sure to set your DVR for an extra half hour at least.

In total, if you start with E! News' coverage, you could watch the Oscars for a grand total of six hours, but if that's way too much celebrity coverage for you, then you can opt to tune in for only the actually awards ceremony, which will last for three hours.

Although this year's ceremony probably won't be as exciting as last year's envelop debacle — or, at least, it shouldn't be — you'll definitely want to tune into the show. There are a lot of great nominees this year. The Best Picture nominees are quite varied and include Call Me by Your Name, Darkest Hour, Dunkirk, Get Out, Lady Bird, Phantom Thread, The Post, The Shape of Water, and Three Billboards Outside Ebbing, Missouri.

One category to keep an eye on is definitely Best Director. Greta Gerwig could be the second woman to ever win the gold statue for her work with Lady Bird (she's only the fifth woman to ever be nominated) or Guilleramo del Toro could be the second Latino to win the award for Shape of Water. If Jordan Peele wins for Get Out, he'd be the first black director to win ever (he's the fifth to be nominated). Also nominated in the category are Christopher Nolan (Dunkirk) and Paul Thomas Anderson (Phantom Thread).

Another category to keep your eye on is for Best Actress. The legendary Meryl Streep broke her own record for most Oscar nominations with her Best Actress nod for her role in The Post. She's won Oscars for her roles in Kramer vs. Kramer in 1979, Sophie's Choice in 1982, and The Iron Lady in 2011. If she wins this year she will be tied with Katharine Hepburn for the most acting Oscars. This year Strep is up against Sally Hawkins (The Shape of Water), France McDormand (Three Billboards Outside Ebbing, Missouri), Margot Robbie (I, Tonya), and Saoirse Ronan (Lady Bird).

The awards show will also include performances by all the Original Song nominees, including Mary J. Blige performing "Mighty River" from Mudbound; Common and Andra Day performing "Stand Up for Something," from Marshall; Sufjan Stevens performing "Mystery of Love" from Call Me By Your Name; Keala Settle performing "This Is Me" from The Greatest Showman; and Gael García Bernal, Natalie Lafourcade, and Miguel performing "Remember Me" from Coco.

There's a lot to see at this year's Oscars, so make sure to tune. You won't want to miss it!