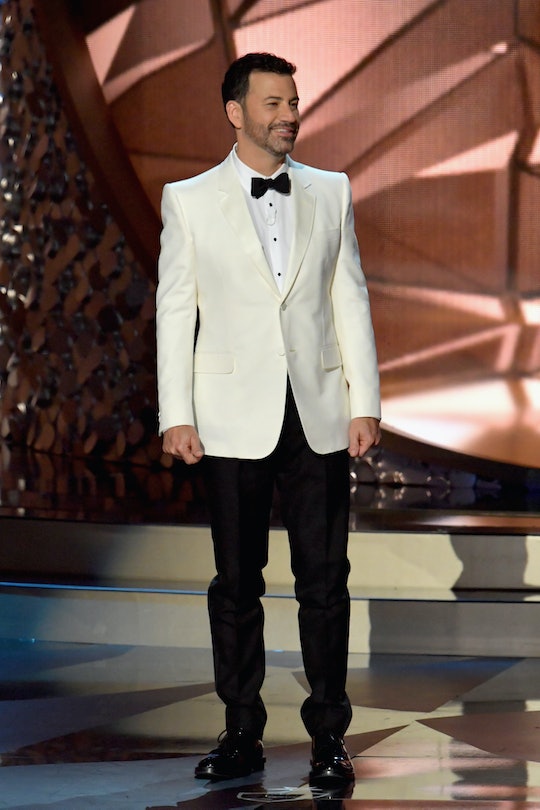 Like much else in 2020, the Emmy Awards are set to look a little different. While they will still be held amidst the ongoing pandemic, some changes have been put in place to keep everyone safe. Notably, the awards will be held virtually to provide for an abundance of social distancing. With the program running differently than in years past, you may be wondering how long the Emmys are this year.

While much has changed, the 72nd year of the Emmy Awards hosted by Jimmy Kimmel will still run its standard three hours, so you'll still need plenty of snacks and get the kids in bed since it'll be a late-ish night. According to Variety, Kimmel will host the award show remotely from a stage inside the Staples Center in downtown Los Angeles. And while the live audience and red carpet walk aren't on the books for this year, the broadcast will be featuring guests and nominees in a total of 140 locations across the globe.

Despite the changes, the Emmys will run for three hours from 8 p.m. to 11 p.m. ET on Sunday, Sept. 20. For those looking to tune in, the awards can be viewed on ABC, YouTube TV, and Hulu + Live TV.

The award's executive producer Ian Stewart explained to Variety that the show is set to be much more laid back this year. "It will go where it goes," he told the news outlet. "We hope really well, but I can’t sit here and say that it’s going to go 100% perfectly because no one’s ever done it before.”

Kimmel is no stranger to hosting the Emmy Awards, having presided over the ceremonies in both 2012 and 2016. But, understandably, he is expecting a bit of a different process this time around. As he told People, the Emmys in 2020 will be "harder and a completely different ball game."

In particular, Kimmel is missing the live audience as a gauge for his performance. "As a comedian, getting no laughs is tough," he told People. "That's the measure of whether something was funny. So the challenge is how to make it feel like not all the jokes are bombing."