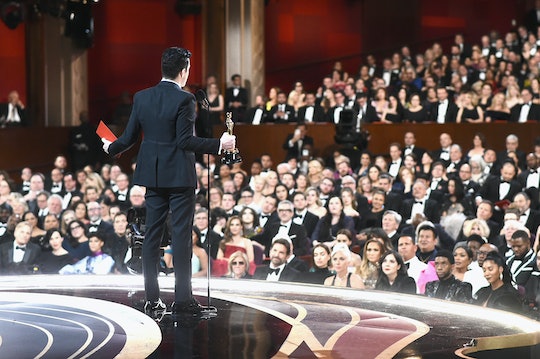 Wondering Whether To DVR The Oscars Or Stay Up For The Shebang? Here's What To Expect

The 92nd Academy Awards kicks off this evening at 8 p.m. ET, which is also right about when plenty of exhausted parents are getting their not-so-exhausted kiddos ready for bed. So if you're contemplating whether you should attempt to stay awake for the whole show, or just DVR the whole shebang and go to sleep with your little ones ASAP, knowing how long the Oscars are will you help make the proper preparations.

As with most awards shows, viewers shouldn't expect the Oscars to be brief or stay totally on schedule. Although the Oscars are scheduled to begin at 8 p.m. ET Sunday on ABC and end at 11 p.m., the odds of that happening are slim to none. All you have to do is look at past years to see why.

The Oscars notoriously runs late. Back in 2002, for example, the show lasted a staggering 4 hours and 23 minutes — the longest in Oscars' history. Similarly, the 2018 show ran for 3 hours and 53 minutes, and the 2019 Oscars lasted 3 hours and 23 minutes. In an attempt to reel in the runtime, the Academy attempted to roll out structural changes to the show, including announcing four of the awards over commercial breaks, according to Vox. But that concept backfired when people revolted ahead of the show. Now it seems the Oscars is back at square one.

So just a heads-up, weary parents: Chances are, the 92nd Academy Awards will be lasting a bit longer than three hours this evening. If your kids' bedtime is around 8 p.m., I would suggest putting them down a little earlier. And if it's your goal to make it to the very end of the Oscars, I would advise grabbing plenty of snacks ahead of time — and maybe even programming your DVR just in case you accidentally doze off. Because let's face it; after running around the kiddos all weekend, it's highly probable. Good luck!