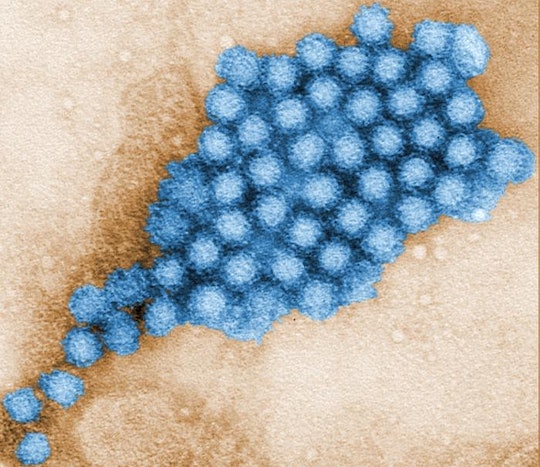 The Norovirus Can Stick Around For Weeks

The stomach bug is never fun — and always hits schools and homes when parents least expect it — or want it to happen. The stomach flu, or Norovirus, has been popping up all over the nation, even shutting down one Santa Monica, California middle school over a reported outbreak. But once the Norovirus is out of the schools and into your home, how long can the Norovirus survive? The Norovirus is pretty powerful and likes to stick around on things.

More Like This
The FDA Has Authorized The Pfizer Vaccine For Kids As Young As 12
Josh Duggar's Family Has Spoken Out As He Faces Child Pornography Charges
Queen Elizabeth Has Given Her Royal Approval For A New Line Of Beer
The Obamas’ New Family Rule? Get Vaccinated If You Want To Hang Out With Us

Nothing is worse than the stomach flu — especially one that likes to stick around. Unfortunately, norovirus loves clinging to different objects — especially food — and basically moves into your home once it can get inside. According to Dr. Annie Pryor and her website, Stop The Stomach Flu, one study conducted in 2006 found that norovirus lasted on kitchen countertops for up to seven days and lasted up to weeks in refrigerated food. According to the Centers for Disease Control and Prevention, norovirus can stay on objects or surfaces and continue to infect people for weeks. According to Scientific American, norovirus can survive up to 61 days in well water. In addition to surfaces and food, according to NBC News, norovirus continues to stay in the body after the symptoms show, therefore infecting those all interactions — and it only takes a super small amount of virus particles to infect another person.

It is basically harder to get rid of norovirus than your ex-roommate's ex-boyfriend from college. It basically moves in "temporarily", destroys your home, and once its there, you can't get rid of it.

According to The New York Times, a person with norovirus stays contagious for about three days once they've recovered from the virus — but those infected should stay away from people from about a week once the symptoms pass. This is because of the virus' continued presence on objects the infected person has interacted with. According to the CDC, a person can fully shed the virus 2 weeks or more after recovering from the symptoms. Yikes.

So if the norovirus can stay on surfaces, on food, and in people for weeks, then how can people get rid of it? Just like your ex-roommate's ex-boyfriend, the surfaces the virus might have "interacted with" will need a good deep cleaning once you believe the virus is "gone." According to The New York Times, surfaces that might have been touched or gotten germs on during the worst stage of the illness should be "doused with a concentrated solution of bleach and water." Clean everything. And while those who have been and continue to be infected with norovirus can't exactly get rid of it, they can wash their hands for at least 30 seconds to keep the virus at bay.

If you think norovirus is gone from your home once you or your child is no longer displaying symptoms — think again. Disinfect your home and wash your hands carefully — because the norovirus loves to stick around.