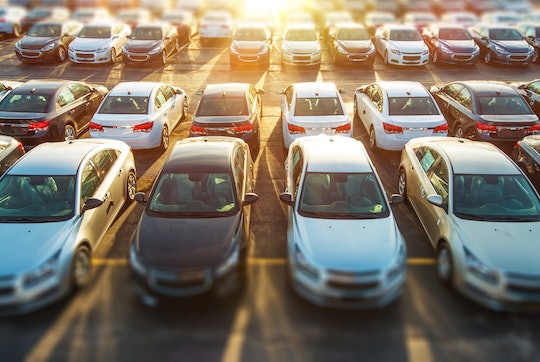 How Long Can Your Kid Be In A Hot Car?

I don't know if it's because I'm a mom, but I've noticed far too many deaths related to kids being left in hot cars over the past few years. Although some of these incidents occur because a parent completely forgot their child was there to begin with, others happen because parents don't know the severity of leaving a child in a hot car for any amount of time. "How long can your kid be in a hot car?" isn't an easy question to answer, mainly because a child should never be left in a hot car. The risk of permanent damage, heat stroke, and death only increase dramatically with each passing minute.

Even if you're just stepping out to grab a couple things or running inside for a few minutes to go to the bathroom, damaging effects can start to set in immediately. According to Cafe Mom, it only takes 15 minutes for a child in a hot car to suffer life-threatening brain or kidney injuries. But no matter how quickly a person thinks they can leave their kid and be back, it's not safe. If you're leaving your child in the car on a hot day, you're taking a gamble – no matter how long.

Still thin a few minutes can't hurt? RedCastle Crusade made the "One Decision" video to show what happens to a toddler when left in a hot car. The scariest part is that it's not the negligent, abusive, or drug-addicted caregiver it may be easier to imagine it happens to. It's parents like you and me.

According to the video, "every 10 days a child dies from vehicular heatstroke in the U.S. alone." To further breakdown these statistics, No Heatstroke shared that 54 percent of children who died due to vehicular heat stroke were forgotten by their caregiver, 28 percent were playing unattended in a vehicle, 17 percent were intentionally left in the vehicle, and 1 percent were recorded as "unknown." These are kids anywhere between newborn age and 14 years old. However, an alarmingly large majority are under the age of 3.

Still not convinced? NFL Football Player Tyrann Mathieu sat in a hot car to show how damaging hot cars can be even for adults. After just eight minutes, he could no longer take the heat and had to remove himself from the vehicle in pretty rough condition. Although Mathieu originally created this video with PETA for animal awareness, it's just as powerful when related to children.

You may think this could never happen to you, but as mentioned above, 54 percent of children were forgotten by their caregiver who simply suffered a memory lapse. Luckily, there are a few simple ways you can prevent hot car deaths and ensure this doesn't happen to you.

First, you should never leave a child in a hot car, no matter how quick you think you'll be. If you're worried about forgetting, there are also navigation apps like Waze that allow you to enable a child reminder to go off when you've parked your vehicle.

Additionally, utilizing "the dutch reach" to open your car door can help you remember to turn around or, at the very least, look in your rear view mirror to see your kid. The dutch reach simply consists of using your right hand to reach for the door handle, instead of your left, forcing you to turn your body toward the backseat. This tactic was originally invented to help drivers see oncoming cyclists before opening their doors but can be used to remember to look in the backseat too.

Most of all, it's important to really push yourself to get in the habit of taking the extra three seconds to turn around and look in the backseat. Even if you're sure you didn't bring your kids with you, getting in this habit can still save a life. It's so simple but essential, and once you get in the habit, it will become second nature.