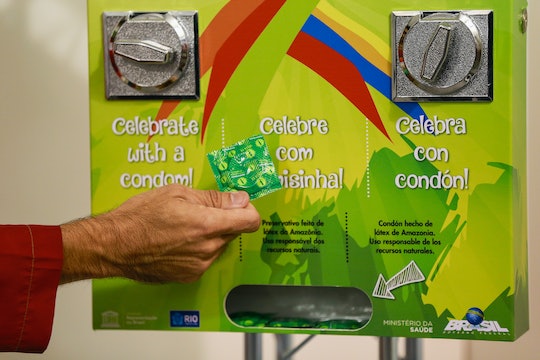 How Long Can Zika Be Sexually Transmitted? It's Important To Take Precautions

Now that locally-transmitted cases of the Zika virus have been confirmed in Florida, the one hypothetical threat of home-grown cases (as opposed to those who contracted the virus through travel), has become a reality. Although pregnant women are still at highest risk of complications from Zika, due to the fact that the virus can cause devastating birth defects, a growing number of others are also suffering from related issues — ranging from mild symptoms like a rash, joint pain, fever or vomiting, to more severe problems, like temporary or permanent paralysis as a result of Guillain-Barré syndrome. With the likelihood that the number of local cases will only increase, sexual transmission of Zika also remains a concern, as individuals who have contracted the virus can unknowingly pass it on. How long can Zika be sexually transmitted? The Centers for Disease Control advises caution.

According to the CDC, anyone who has the Zika virus can pass it on to their sexual partners through "vaginal, anal, oral sex, and the sharing of sex toys." This is because the virus is known to remain in both semen and vaginal fluid (as well as other bodily fluids, like blood and urine). Sexual transmission is not just a risk for those who are experiencing active Zika symptoms, but can occur "before their symptoms start, while they have symptoms, and after their symptoms end." As a result, the CDC recommends that pregnant women use condoms or another barrier method every time they have sex for the duration of their pregnancy if they are either living in a Zika zone, or if their sexual partner has traveled to a Zika zone.

Non-pregnant women, or men, should still use protection to prevent the spread of the virus, though those guidelines vary depending on whether they live in an area where Zika is locally-transmitted. If they do, then the CDC recommends using a barrier method every time, or abstaining completely, since there would be no way to know whether they have been exposed to the virus. If not, then the risk of sexual transmission would only likely be an issue if one or both partners has traveled to a Zika zone. Those without symptoms should abstain or use protection for at least eight weeks after returning home, and the same length of time is also recommended if one partner has symptoms but is female (Zika doesn't live as long in vaginal fluid). Male partners with symptoms of Zika pose the biggest risk, however, and should either remain abstinent or use barrier methods for at least six months after their symptoms appeared.

The confirmation of local Zika cases in southern Florida has many experts worried, particularly local OB-GYNs whose pregnant patients are now at risk for babies born with severe microcephaly. Dr. Christine Curry, an assistant professor of obstetrics and gynecology at the University of Miami Miller School of Medicine and Jackson Memorial Hospital, told NPR that, while many hoped that Zika might not actually turn out to be a major issue, it certainly doesn't look like that will be the case:

I think it's fair to say that most obstetricians had never heard of this virus a year ago...I knew from the get-go that it may end up being nothing, and just an interesting story out of Brazil, or it may end up being a reproductive game changer, which is, I think, where we're at right now.

In a news conference Monday, Dr. Tom Frieden, director of the CDC, advised pregnant women to avoid traveling to Miami, which is where the locally-transmitted Zika cases have occurred, according to CNN. Frieden explained that the area poses a specific risk to pregnant women, especially because local officials haven't had much luck getting the mosquito population there under control:

In Miami, aggressive control measures are not working as well as we would like. The mosquitoes could be resistant to the pesticides being used, or the mosquitoes could be hiding in what we call 'cryptic' breeding places that are hard to find, like very small amounts of water where they can hatch.

The Aedes aegypti is a really tough mosquito to control. When Key West had an outbreak of dengue, which is carried by the same mosquito, that outbreak continued for more than a year. It's a demonstration of how intensive the efforts need to be to control the mosquito.

The ongoing threat of Zika is certainly concerning, especially now that it's possible to get the virus from mosquitos in the continental U.S. But until vaccines or a treatment is approved, prevention still appears to be the best way for individuals to protect themselves, including ensuring safe sex methods to prevent sexually-transmitted cases.