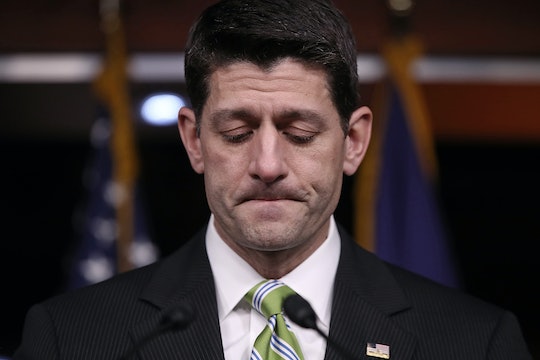 Here's How Long It Took Obamacare To Pass

After Republican leaders decided to kill their Obamacare replacement plan Friday afternoon, many were quick to celebrate. The death of the American Health Care Act meant that the Affordable Care Act would survive, and, for now, Americans maintain their health care. However, a temporary halt on repealing and replacing Obamacare doesn't necessarily mean that the ACA is completely safe. With a Republican-controlled House, Senate, and White House, it's likely that the health care debate is far from over. And, as a chilling reminder of how long things can drag on in Washington, D.C., many have been wondering, how long did it take for Obamacare to pass? Former President Barack Obama's namesake legislation was highly contested for months.

Shortly after Obama took office, he made a promise to reform American health care, and he didn't back down. H.R. 3962 was presented to the House of Representatives in July of 2009, and wasn't signed into law until March 23, 2010, after months of revisions, amendments, and debates about the bill. And after it was passed, it still wasn't safe. In fact, according to TIME, "the House voted to repeal or amend the Affordable Care Act more then 50 times since it was passed in October 2009."

Clearly, the ACA isn't popular among most Republicans, and, as Trump spent much of his campaign promising to repeal the piece of legislation, his voters have been eager to see the demise of Obama's most famous act as president.

But, the Republican plan to replace the ACA was hastily written, and opposed by Democrats, as well as numerous Republicans who complained that the new legislation was simply, "Obamacare Lite." So really, though this latest development from Capitol Hill is a bit surprising, it isn't completely shocking.

However, as past record indicates, this doesn't mean that the fight is over. As this is only the Republican's first fully-fledged attempt to replace Obamacare, and they voted more than 50 times to repeal it (in less than 10 years), it's extremely likely that they will attempt another go at killing the ACA.

And even though House Speaker Paul Ryan has since said Obamacare is "the law of the land," Democrats shouldn't relax entirely just yet. The ACA took almost one full year to pass, and has set the stage for the health care debate to truly become a central part of American politics.

Trump expects Obamacare to "explode," and thinks that Republicans "couldn’t get one Democrat vote, not one. So that means they own Obamacare and when that explodes, they will come to us wanting to save whatever is left, and we’ll make a real deal."

Until then, though, 22 million Americans will continue to have health coverage, and deliver a emphatic, "thanks, Obama!"