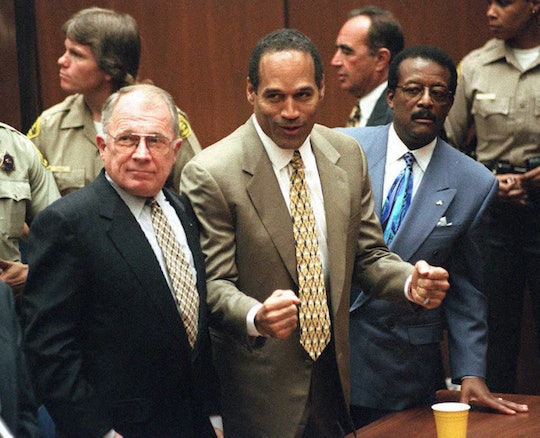 How Long Did The O.J. Simpson Jury Deliberate? Their Decision Was Quick

There was clearly a lot of interest in the O.J. Simpson trial. People were watching it like it was a primetime drama. It has been referred as the first reality show, so it's not that far off. There was always going to be media attention during the case, but none higher than when the jury had to deliberate guilty or not guilty. This was the moment that everyone was waiting for — the reason many stepped away from their lives for months. So, how long did the O.J. Simpson jury deliberate for? The answer is actually one of the most shocking things about the case.

The O.J. Simpson trial for the murders of Nicole Brown Simpson and Ron Goldman — charges for which Simpson was famously acquitted of — last over eight months. It spanned from opening arguments in January, to the verdict in October. That's a long time. You'd think that warranted a long jury deliberation, right? You'd also think that after a handful of defense attorneys and prosecutors put their blood, sweat, and tears into a case that the jury would humor them with at least a quick vacation during deliberation, right?

I don't know if some of them even had time to valet their cars — that's how quick the jury deliberation was.

After eight months of one of the most notorious trials, ever, the jury deliberated for less than four hours. That's FOUR, with a four. Six of those deliberations would fit in a day. In a shorter amount of time than some of my college retail shifts, a jury decided that O.J. Simpson was not guilty of the murders of Nicole Brown Simpson and Ron Goldman. This included a lunch break.

Clearly, this shocked many. CNN wrote in 2007 that a quick decision like that shocked many legal analysts, many of "who had predicted it would take anywhere from two days to two months." According to the same CNN article, the "jurors asked to re-hear testimony from the limousine driver who drove Simpson to the airport shortly after the murders." That's it.

It is pretty shocking that any decision could be made in that amount of time. It just proves that the jury was confident enough in their decision. USA Today wrote an article in 1996 where a juror, Brenda Moran, was quoted from a press conference the day after the verdict where she said, "We've taken this case serious for nine months. It didn't take us nine more months to figure it out. We're not that ignorant." And the rest was history.