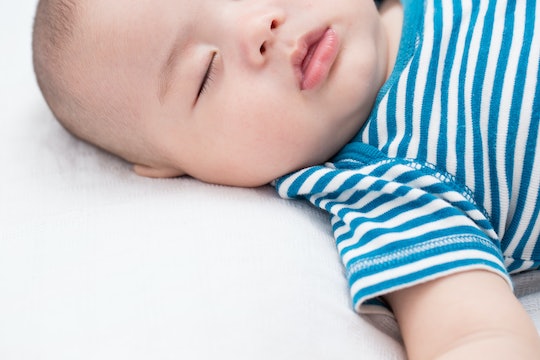 Here's How Long Your 4-Month-Old Should Be Sleeping

Congratulations, you're out of the infamous fourth trimester. You've healed like a champ, learned to do everything one-handed, and maybe even stopped maniacally sobbing "I can't do this" twice a day. But even though things are beginning to get easier, the sleep deprivation may be hitting you hard. At this point you might be wondering how long do 4-month-olds sleep, and whether your experience is normal.

According to the American Academy of Pediatrics (AAP), 4-month-old babies need a lot of sleep. Some variance is assumed for each little baby body, but the AAP confirms that at this age, infants need at least 12 hours and up to as many as 16 hours of total sleep per day, naps and nighttime combined. Yet this is also the stage when many parents begin to get frustrated with the term "sleeping like a baby," as their bundle of joy begins to wake with increasing frequency in the night.

It's actually common for babies to experience a sleep regression around the 4 month mark, when infants become more distractible during day feedings and hence, more demanding for nighttime ones. Parents who were celebrating their luck with a "good sleeper" last month are suddenly rubbing bleary eyes and Googling sleep experts at 3 a.m.

Certified Sleep Consultant Christine Stevens, of Sleepy Tots Consulting, tells Romper that moms can expect a 4-month-old to nap an average of 30 to 90 minutes several times a day. During the night, Stevens explains, most babies at this age sleep an initial stretch of six to eight hours before waking to eat, after which they will typically wake again after only two. So if your baby isn't dozing 'til dawn, you're not alone.

The good news is, there are things you can do to foster healthy sleep patterns in your baby. In an interview with Romper, Stevens explains that proactive measures, such as having a consistent bedtime routine and an early bedtime, encourage the best possible sleep habits for little ones.

Every parent in the throes of night wakings has a friend whose baby has been sleeping for 12 hours at a time since she exited the womb. This can be maddeningly frustrating, but remember: when it comes to infant sleep patterns, there is a wide spectrum of what is considered normal. Exercise self-care, enlist your partner to take some of the wakings, and know that in time, this too shall pass.