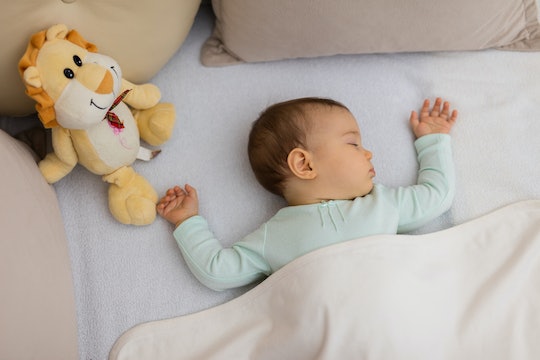 Turns Out, Your 8 Month Old Should Probably Be Sleeping More

While parents are often criticized for comparing their children to others, it's not without a valid reason. Most of us just want to make sure we're doing the whole parenting thing correctly. When it comes to sleep schedules and routines, it's common for parents to ask around and see how their child measures up to the "typical baby." So if you're starting at your little one and asking yourself, "How long do all 8 month olds sleep?" there's no judgment. Even though every family and every baby is different, knowing a few expected commonalities when it comes to our children's growth and development can either let us parents know our babies are on the right track, or alert us to any potential problems we might have to seek help to address.

According to the Baby Sleep Site, it's extremely common for most 8-month-old babies to experience sleep problems. While most parents, according to the same site, notice the infamous 4-month sleep regression, a change in sleep patterns when your child is a little older can be more difficult to spot. This sometimes allusive period of restlessness, according to The Baby Sleep Site, can last around four weeks, but can also commonly last between three to six weeks as well.

Sleep regressions are a period of time in which children who have otherwise established sleep schedules suddenly start waking up in the night, or refusing to go to sleep at all. These changes in previously established sleep patterns can be difficult for parents to manage and can even be a source of concern, but according to the American Academy of Pediatrics, are a normal part of a baby's sleep pattern.

Baby Center advises that 8-month-old babies need around 14-15 hours of sleep per day, made up of overnight sleep and naps throughout the day. This is only a guide, however, and you may find that sometimes your baby meets this target, and sometimes they don't.

While it's common for most parents (including yours truly) to feel as though you're somehow failing if your baby wakes up in the middle of the night, as long as your little one is well rested and happy it doesn't really matter whether they wake or not during the night. KellyMom advises that breastfed babies especially, may not be sleeping through the night at this age and if mother and baby are happy there is no cause for concern.

At around this age, according to the Baby Sleep Site, many babies drop from three daytime naps to two and this could explain the tendency for their sleep patterns to become disrupted. Any developmental change can cause babies and small children to have unusual or changeable sleep patterns, too. So, in a way, when your baby's sleep is disrupted, it stands to reason it's because their brain is getting it's growth on.

As long as your baby is happy and healthy and meeting sleep targets, or coming relatively close to them, you can both rest easy. Well, sort of.