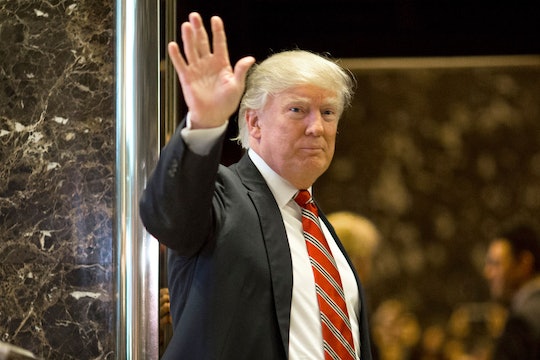 President-elect Donald Trump shocked the world when he won the election in November, but things haven't exactly gone smoothly since then for the businessman-turned-leader-of-the-free world. His handling of the presidential transition has, according to two new polls, left Trump's approval ratings below any president's in modern history. Without public support, how long do people think Trump will last in office? There is plenty of speculation he won't last the full four-year term.

A new CNN/ORC poll released Tuesday shows Trump's approval rating is 20 points lower than any of the most recent former Presidents', including Bill Clinton, George W. Bush, or Barack Obama, CNN reported. Just 40 percent approve of the job Trump is doing compared with Obama's 84 percent approval rating at the same point in his presidency. More than half of those polled — 53 percent — say Trump's "statements and actions" since his election have caused them to lose confidence in his ability to handle the office, according to CNN.

In true Trump fashion, the President-elect swatted away his poor ratings and dismissed the poll. "The same people who did the phony election polls, and were so wrong, are now doing approval rating polls," Trump wrote in a tweet responding to the CNN report. "The are rigged just like before."

But in the meantime, Trump continues to feud with everyone from the intelligence community, to the cast of Hamilton, and even Meryl Streep. And even more troubling, the PEOTUS seems to refuse to address concerns about conflicts of interest between his office and his business and the help Russia gave Trump in the election.

White House ethics expert Walter Shaub said on Jan, 11 about Trump's plan to hand his business over to his adult sons while he's in the White House, "...the plan the president has announced doesn't meet the standards...that every president in the past four decades has met." Trump's transition team hasn't responded to Romper's request for comment regarding the conflicts of interest that could arise when Trump is asked to make a policy decision that could affect his own business.

Besides ethics questions, there are looming concerns about Russia's attempts to sway the election in Trump's favor, and possible ties between the Trump administration and Russia, which has led a senior House Intelligence committee member to call for a full Congressional hearing, according to The Guardian. Trump's transition team has not responded to Romper's request for comment regarding Trump's ties to Russia.

All of these headlines play into predictions from pundits like filmmaker Michael Moore, who have predicted the Trump presidency won't last a full four years, and will end either in his resignation or impeachment. Here's what he said on MSNBC's Morning Joe just after Trump's election, according to the Huffington Post:

Here’s what’s going to happen, this is why we’re not going to have to suffer through four years of Donald J. Trump, because he has no ideology except the ideology of Donald J. Trump. And when you have a narcissist like that, who’s so narcissistic where it’s all about him, he will, maybe unintentionally, break laws. He will break laws because he’s only thinking about what’s best for him.

Moore's view is shared by Allan Lichtman, who earned the nickname "Prediction Professor" for accurately forecasting the winner of every presidential election since 1984. Now he sees impeachment on the horizon for President Trump, according to CNN:

There's a very good chance that Donald Trump could face impeachment.... First of all, throughout his life he has played fast and loose with the law. He has run an illegal charity in New York state. He has made an illegal campaign contribution through that charity. He has used the charity to settle personal business debts. He faces a RICO lawsuit.

Even before his election, Trump was asked if he would consider quitting the presidency after he achieved the thrill of beating the competition. “I’ll let you know how I feel about it after it happens,” he said, smiling, according to the New York Times.

Let's face it, the life of a businessman living in a golden tower has got to be easier than trying to run the entire American government, right? In the event any of these things happen, Americans could be looking at a future where Trump's Vice President-elect Mike Pence is behind the wheel — and that's honestly not much more promising than the current state of things.