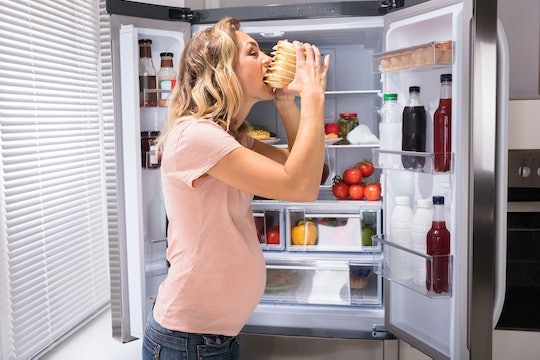 When I was pregnant, I had more aversions than cravings, which made finding a good healthy meal that actually sounded appealing pretty difficult. I'm not normally a big meat eater, but oddly enough found that turkey sandwiches almost always sounded good. So during my pregnancy I ate a lot of turkey, much to some people's horror. But the myth that gestating women shouldn't eat deli meat isn't exactly true; it's actually just fine when heated. So how long do you heat up lunch meat when pregnant? Here's what my research found.

According to The New York Times, hot dogs and deli meat carry the risk of being contaminated with listeria after processing, endangering the consumer with the possibility of contracting the disease listeriosis. Because of this risk, the meats should be warmed up until steaming hot. Listeria is a bacteria that can actually grow in the cold air of the fridge, making it different than many other germs. If present, the only way to kill listeria is by cooking and pasteurization.

But hey you've never gotten listeriosis before, right? Is it really that big of a risk? It turns out, it is. Pregnant women are a whopping 20 times more likely to get it than other healthy adults. And while the symptoms of Listeria are pretty mild for the mama-to-be, the repercussions can be serious for the baby: Miscarriage, stillbirth, and lifelong health problems are among the possible outcomes for the developing fetus.

The Center for Disease Control and Prevention (CDC) gets even more specific, instructing pregnant women to heat lunch meat to an internal temperature of 165 degrees Fahrenheit. The CDC recommends keeping factory sealed, packaged lunch meat in the refrigerator for a maximum for two weeks, and says it should be eaten within three to five days once opened. Meat sliced at a local deli should be kept in the fridge no longer than five days.

According to the CDC, an estimated 1,600 Americans become seriously ill with listeriosis each year and about 260 die. While most healthy adults enjoy a very low risk for the disease, pregnant women are listed among the most vulnerable, along with newborns, the elderly, and those with already weakened immune systems. In fact, pregnant women account for 17 percent of annual cases of listeriosis; that's one in every six cases.

Although the overall numbers are still quite low, there is enough danger present to advise all pregnant women to steer clear of cold cuts. But since Americans live on our deli meats, medical professionals suggest heating them up as a kind of compromise.

The American Pregnancy Association has advice for pregnant women craving a sandwich, and first and foremost it's to find a suitable replacement. However, "If you plan to eat deli meats anyway, we highly suggest re-cooking the meats until they are steaming. If the meat is heated to steaming, any present listeria bacteria should no longer be alive. More than likely everything will be fine, but if at all possible, it is best to find another go-to food."

In my case, I never did find another "go-to food", so I had to make my peace with a steaming sandwich. If you're finding the idea of microwaving your lunch meat hard to stomach (wink), considering toasting the whole thing, panini-style, on a stovetop. Slather a little pesto sauce onto the bread and you'll fool yourself into thinking you've got a gourmet meal right before your eyes. For what it's worth, I'm still making them for myself, three months after the birth of my son. I may never go back to cold cold cuts again.