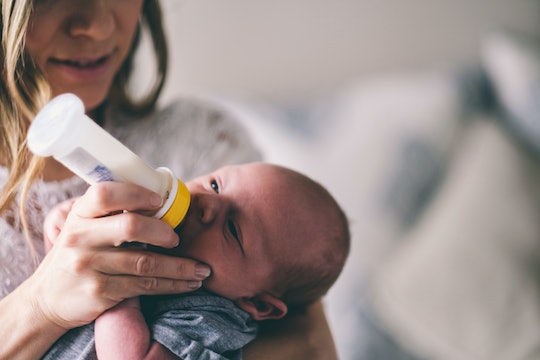 How Long Does Formula Last Without Refrigeration

Feeding a baby may seem like an easy concept, but in reality, it's far from it. Regardless of whether you choose to breastfeed or bottle feed, there's countless things to consider when preparing your baby's milk. When formula-feeding specifically, considerations need to be taken in how you're preparing the formula, how long it stays out, and what to do with the leftover formula when your baby hasn't quite finished the bottle. If you're new to formula-feeding, you might wonder, "how long does formula last without refrigeration?"

According to the U.S. Department of Health, there are many things to consider when preparing formula safely. Formula can be easily contaminated during preparations, so hand washing, keeping bottles clean, and measuring formula properly can all help to keep your baby safe.

What sort of water you use to prepare powdered formula is not a concern in most areas, as most tap water is considered safe for baby's consumption, according to Mayo Clinic. But, if you are concerned about water safety where you live or when traveling, The American Academy of Pediatrics (AAP) suggested bringing tap water to a rolling boil for about one minute. Once that water has cooled, you can use it to mix your baby's formula.

In terms of prepared formula, there's a few things to keep in mind. As the AAP mentioned, once formula is prepared and at room temperature, it should only stay out for an hour. After that, you should discard it in order to prevent foodborne illness.

Formula that has been prepared and not yet served can be safely kept in the refrigerator for up to 24 hours in order to keep it free from bacterial contamination, as noted by Kids Health. Unfortunately, as mentioned by the AAP, once formula is prepared and served, any remainder should be tossed, as there's a chance that bacteria could have formed since the last feeding. I know — nobody wants to waste a drop of formula.

The rules of food safety when it comes to your baby's milk can get confusing. If there's any looming questions, asking your pediatrician can help clarify. (And maybe save your wallet.)