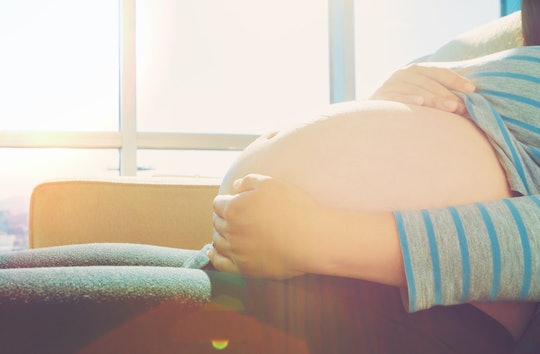 The Truth About Postpartum Stomach Shrinkage

After nine months of stretching and growing to accommodate another human, your stomach is understandably larger than you're used to. And though you will lose a certain amount of your baby belly after you've given birth, you're probably wondering, how long does it take for your stomach to shrink back after giving birth? Because every woman's body is different, there are several factors that affect how quickly your stomach returns to its pre-baby state. Depending on how much weight you gained during your pregnancy, your diet and exercise habits, and whether or not you're breastfeeding, the answer varies for every woman.

In an article for Fit Pregnancy, Sarah B. Krieger, a spokeswoman for the Academy of Nutrition and Dietetics who does home visits with pregnant women and mothers, reported that you will see some difference in your stomach right after you give birth. According to Krieger, women lose an average of 12 pounds right after giving birth. It turns out quite a bit of that baby weight you gained was actually your baby. However, that doesn't mean you should hop right back on the scale and start comparing the numbers. Krieger advised new mothers to wait at least two weeks before stepping on the scale. It's not about what you weigh, it's about what you feel, according to Krieger. "The number on the scale is usually not reflective of body fat, so don't discourage yourself," Krieger said.

You can expect your uterus to return to its normal size between six and eight weeks after you give birth, according to Baby Center. But your belly? That's an entirely different story. After you give birth, it's not uncommon for your stomach to be soft and round, as though you're still about six months pregnant. And though you might hear stories of miracle moms snapping back to their tight tummies days after pregnancy, the truth is, it's not the norm. Baby Center noted that for most women, it takes several months to get rid of the the "pregnancy pouch" as they so affectionately call it. And though that's probably not the answer you want to hear, patience is key.

You also have to take into consideration how much weight you gained during your pregnancy. If you gained 25 pounds during your pregnancy, it's much more feasible to be back in your skinny jeans in two months than it is if you gained say, 50 pounds during your pregnancy. You also have to consider your activity level. Dr. Ashley Roman, a clinical assistant professor in the Department of Obstetrics and Gynecology at NYU Langone Medical Center, told Fit Pregnancy that, "women tend to lose more weight after birth if they are breastfeeding because breastfeeding consumes calories." According to a Women's Health interview with Tanya Zuckerbrot, M.S., R.D., author of The F-Factor Diet, this is because breastfeeding burns an extra 300 to 500 calories a day. However, most doctors recommend breastfeeding mothers consume extra calories, so if you're breastfeeding and losing weight rapidly because of it, chances are it's because you're not getting those recommended extra calories.

According to Baby Center, nursing not only helps burn calories, but helps trigger contractions that help shrink the uterus. Naturally, exercise will help you get your stomach back to where it was before pregnancy, but before you take up an extreme exercise regimen, you'll want to make sure your body is ready. If you're concerned about what exercises are safe to do in your post baby body, read the American Congress of Obstetricians and Gynecologists' guidelines for postpartum exercise. And though you may think a diet is the most obvious way to lose your baby bump, according to Baby Center you should wait at least six weeks before you considering cutting calories.

And remember every woman's body is different. Comparing your postpartum body to someone else's won't change the way your body bounces back. Only exercise, genes, and good nutrition can do that.