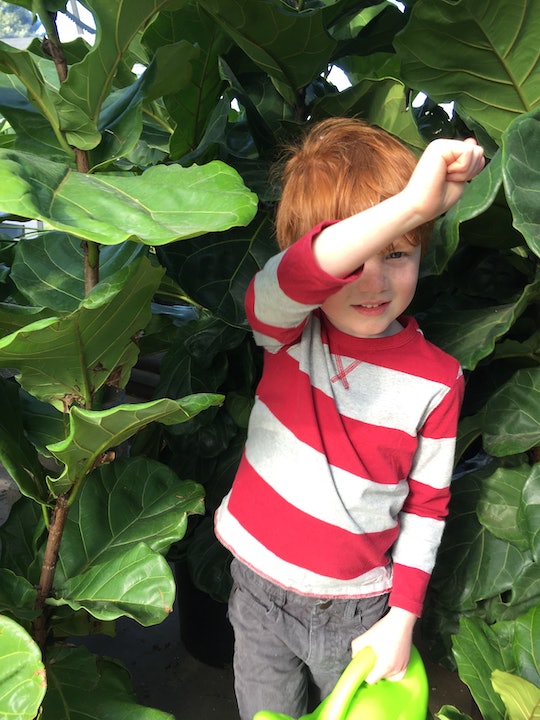 This Is How Long It Take To *Really* Know Your Child, According To Parents & Experts

The moment Harvey was born, I had the uncanny feeling that I knew my child perfectly. I remember looking at his little face and thinking “there you are," as if he was a person I’d been missing all this time. At 22 months, I described him in my journal: "Sweet, silly, and interested. A little flaky, especially when it comes to other people, but not selfish or jealous. Pretty good sharer. Rolls with the punches. Cautious towards things that seem weird, but quick to come around. Unless he doesn’t, then he sticks to his guns. Does what he wants not to sass me, but because he just gets so much joy out of it (i.e., feeding his food to the dog). Likes heavy metal and hockey. Loves to read. Easy to frustrate."

At nearly 6 years old, that is still a perfect description of my son. I’ve known who he was since practically day one.

Then there’s my daughter. The thought I had when holding her for the first time was, “Who are you!?” I was totally mystified. Her personality always seemed slightly out of focus to me… there but incomprehensible. Why did she react like this? Why did she cry over that? Only now, after 2.75 years of knowing her am I starting to get her.

So why was one kid so easy to understand and the other one such a mystery? Was it just a coincidence that I figured out Harvey so quickly, and took so much longer to work out Mabel? We know that it takes about 200 hours to make a close friend, but how long does it take to get to know your kid?

As little as two years, says Claire Lerner, a clinical social worker and senior parenting advisor for the national non-profit Zero to Three. The key, she explains, is understanding your child’s temperament.

“Temperament shapes the way we experience the world and interact with others.” Claire tells me in a phone conversation. “It’s the collection of characteristics that make each of us unique; How we respond to new people in situations, how intense our emotional reactions are, how we respond to novelty like new situations — it's biologically based.”

In a 1970 study, child psychologists Dr. Stella Chess and Dr. Alexander Thomas identified several distinct temperament traits that all children exhibit including: emotional intensity, activity level, frustration tolerance, reaction to new people, and reaction to change. Knowing where your child falls on each continuum is a very helpful tool in understanding your child.

“And, by the way, you can start to see these things as early as 6 months old,” Lerner told me.

The fact Harvey and I are on the same continuum for so many temperament traits makes it clearer why I figured out who he was way before Mabel. It’s because he’s me! Sort of. And at 36, I do know myself pretty well. The more I get to know Mabel and tune into things like her high sensitivity (girl hates parades) and low frustration tolerance, the better parent I can be to her.

I was curious if other parents had similar experiences to mine. How long did it take them to really know their kids? Or do they feel like they knew their kids at all? Here’s what four parents had to say.

"I’m starting to really get to know Hailie now at 15. I feel like I understand her personality now a lot but… she’s changed so much over the years and I’ve also changed how I’ve parented her as well.

"Everyone thought she was going to be super outgoing and super wild and super crazy and she’s really not. She’s definitely a little bit more conservative in her approach to things; friendly and outgoing in that way, but not wild. Maybe it was me projecting a little bit. I thought that she would be like I was.

I feel like I’m always getting to know them.

"And then you have my middle kid who’s now 12. When he was a toddler, my sister-in-law was like 'Oh god, he’s the frat boy.' He was just wild. So people that knew him in his preschool years still think he’s like this super hyperactive kid, and he’s really actually not. And he’s very quiet with adults. He’s a little more outgoing with kids, but it surprised me that he’s so shy.

"So I feel like I’m always getting to know them."

"Azalea’s always had a lot of energy. She’s always been very interested in being with people and interacting with people. I saw that pretty much like right away. She always wanted to be with somebody. It was very hard to put her down. And she still wants to be with people, to be interacting. I can see the things about that that are similar to me. Like she get anxious when she sees other people not doing what their supposed to be doing — if they’re going to get in trouble, she gets super anxious about that and I remember being exactly the same way.

"And Karuna is different from that in that he’s much more grounded. He’s always been quieter, and has more control over his intensity. But he’s becoming more of a showman like Azalea to get attention.

"I mean... I don't even know myself. I do know not to give C. bananas or R. blueberries. S. hates it if I speak to her in any language that isn't English. Everyone wants the purple plate. Nobody really understands where dirty socks go. The boys prefer metal to hip hop but so far S. will dance if there's a beat. C. wanted to learn to read as soon as possible, but R. is perfectly content being read to.

The best part about having a bunch of kids very close together is that their differences really shine.

"Our biggest fear was that the chromosomes would recombine into mini-us lifeforms that have the worst of all of our qualities but look so much like both of us that we can't pretend we don't know them in public. So the moments of recognition have more to do with seeing something in my kid that I know from myself or from my wife.

"Once in a while though a kid will do a 'good' thing that's so chip-off-the-old-block that I'll have a nice little 'cancel the paternity test' moment. That doesn't really add up to my knowing who they are. Maybe it'll help me anticipate where they might struggle along the way.

"The best part about having a bunch of kids very close together is that their differences really shine — even though they have nearly identical experiences and friend groups to date, their personalities are very distinct. I wouldn't call that knowing them, but usually I can remember their names on the second or third try when I need to holler at someone. [Laughs.]"

"With Elsa, my first born, I was just frantically trying to take care of this baby that was demanding all of my attention and all of my time and everything. And I didn’t know if she was normal! I was trying to figure out is this what babies are or mine just nuts? She didn’t sleep at night starting around 3 weeks. So at 3 weeks old, she was up all night and slept all morning. But I didn’t know that I knew that about her yet, if that makes sense.

"But with Violet — she slept through the night pretty easily, but she was a morning bird. And those patterns have stuck with them all throughout their childhood. So with Elsa I didn’t realize that I’d figured that out about her until Violet came along and she was the complete opposite.

I don’t think they know who they are. I think we’re constantly changing and evolving and we should aim for that anyway.

"And Violet starting walking at 8 months old. And after that she was just a lot more physical than Elsa. She’d throw herself into things physically, whereas Elsa was always a little more reserved so… it’s definitely a personality trait that has stuck with Violet.

"I don't even think I know myself. I don’t think they know who they are. I think we’re constantly changing and evolving and we should aim for that anyway."

As our kids grow and mature, they're going to change — as does the way we parent them. And while some aspects of their personalities stay consistent, others will have to adapt to new challenges and experiences. But ultimately we can all agree that the answer to “how long does it take to know your kid?” is somewhere between six months and never. Because, as it turns, out, they're all quite individual.