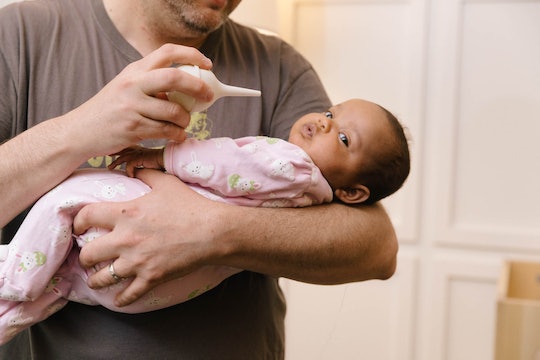 You may have heard that the flu season is especially horrific this year, impacting people in 49 states and killing more people than it has in the past eight seasons. And, sadly, the flu shot is less effective than it has been in previous years, so even if a flu shot is administered — as they should be — your child might still get the flu. So, how long does the 2018 flu last in kids? After all, once you're in the belly of the flu beast, you want to no how long you're likely to stay.

Unfortunately, the answer depends on a variety of factors, including your child's health, age, whether or not they've been vaccinated, and how early you take them in for treatment. According to the Cleveland Clinic, the flu typically lasts for seven to 10 days. Unfortunately, as Dr. William Schaffner, chair of preventive medicine at Vanderbilt University Medical Center, told Healthline, the strain of the flu that's common this year — influenza H3N2 — is particularly nasty, resulting in more complications (like pneumonia) and hospitalizations than normal. And, as previously mentioned, the flu shot may not be as effective against it.

On the bright side, Dr. Paul Biddinger, director of the Center for Disaster Medicine at Massachusetts General Hospital in Boston, told The Cut that if your child gets a flu shot and still manages to get the flu, it will most likely be less serious, and last a shorter amount of time, than if they didn't get a shot. So, if you haven't already, you should definitely get your child vaccinated. Also, according to the Centers for Disease Control and Prevention (CDC), your child may be able to take anti-viral medications to shorten the duration of the illness by one or two days, and reduce complications.

According to Healthline, the flu virus starts with an incubation period of one to four days. During this time period, the virus is growing and multiplying in your body, but you might not have and/or show any symptoms. Unfortunately, you can still be contagious before you even know you have the flu. Dr. Joshua Schaffzin, pediatric infectious diseases physician and director of infection, prevention, and control at Cincinnati Children’s Hospital, told ABC News that parents usually know if their kids have the fu by paying attention to how quickly their symptoms set in. "[The] classic flu feels like you’ve been hit by a truck because it's abrupt onset, high fever, cough, sore throat and all over body aches," Schaffzin said. "It’s very striking for parents because their kid is running around and all of a sudden they don’t want to get out of bed." According to the Cleveland Clinic, once they start, flu symptoms typically last for seven to 10 days.

Unfortunately, as Schaffner told Healthline, this year's flu season is particularly bad due to an increase in H3N2 strains of influenza. Schaffner said, “They tend to result in more complications of flu: pneumonia, having to be hospitalized, and actually dying — that’s number one." To make matters worse, the flu shot doesn't seem to be as effective against it. However, as Biddinger told The Cut, you and your kids ages 6 months and older should get a flu shot if you haven't already. Some protection is better than nothing, and if you get the flu after getting the vaccine, your illness is likely to be shorter and less severe.

According to the CDC, if diagnosed in the first few days of symptoms, children 14 days and older may be able to take anti-viral medications to shorten the duration of the flu by one or two days, and reduce the risk of serious complications. So, it's super important that you take your child to the doctor, if they have classic flu symptoms, including a fever, cough, sore throat, and feeling suddenly unwell, especially if they are under 5-years-old or otherwise at risk for complications. The CDC recommends that your sick child continues to stay home for at least 24 hours after their fever is gone, without the use of medications.

With any luck, your child is likely to get over the flu within a week or two and without having to go to the hospital. But as the flu is particularly bad this season, the CDC recommends prevention — including getting a flu shot, washing your hands, and keeping your distance from people who are sick — as your first line of defense. So, guys, get a damn flu shot. It might make a huge difference for you and your child.