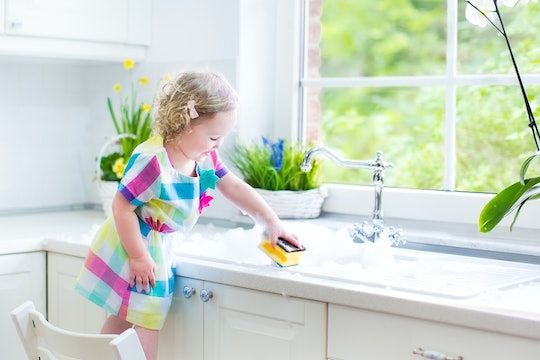 The flu lingers in your body for what feels like forever. It took me almost two weeks to recover from my bout with the influenza B strain. My daughter felt better in about half that time, for which I am extremely grateful. However, this has made us very proactive about the measures we take in our household to prevent anyone else from becoming sick with the flu. We've scrubbed our house from top to bottom several times, but how much is really necessary? How long does the flu live on surfaces, waiting to reinfect the unsuspecting humans in its midst?

The flu is not as virulent a virus as some other prevalent pathogens that we humans deal with in our lives. However, that doesn't mean it dies as soon as it leaves the human body — it's not that fragile. According to PLOS One, the flu virus is not very long lived. In their research, they found that the influenza virus doesn't live much longer than 24 hours on most surfaces. This examination is in a vacuum, however. If a surface is continually exposed to flu, it will continue to harbor active virus on its surface. This is a process called reinoculation. Absent of further exposure, a day or two is about as long as a surface will remain a breeding ground for the virus.

It makes you wonder if all those school closings to clean up because of flu infection should instead just be closed and quarantined for a few days, doesn't it? If only the worry was just the flu. Other prevalent bacteria and viruses also tend to show up at the same time as the flu, and they are far harder to kill. Bacteria such as staph, E. coli, pseudomonas, and MRSA can live on surfaces for months, and become dangerous as a secondary infection to the flu, according to BMC Infectious Diseases.

A study from the American Society of Microbiology might turn your head. Researchers found that surfaces weren't the only gross things you need to worry about. In fact, you don't need to look any further than inside your wallet. Yep, the flu virus lives a bit longer on your money, according to the study. They wrote, "Influenza A viruses tested by cell culture survived up to three days when they were inoculated at high concentrations. The same inoculum in the presence of respiratory mucus showed a striking increase in survival time (up to 17 days)." This has me reaching for my Apple Pay to use instead of ever again handling cash.

Although, my iPhone is probably pretty gross as well.

How long does the flu live on surfaces other than money? It depends on the surface, and oddly enough, they don't live as long on fabric as they do hard surfaces, according to the Mayo Clinic. Which means I for one am extremely grateful for living in New York City and taking the subway all the time. My purse and coat? I can't just wash them all the time. Sure, they might still give me the a terrible stomach virus that makes me pray for death, but at least it's not the flu.

Unfortunately, most surfaces in public areas are continuously exposed to more and more viruses because people are gross and never wash their hands and they don't know how to cough into their elbow, so it's still best to take precautions. You should get your flu shot, sanitize all the things, wash your hands more than you've ever washed your hands before in your life, and avoid touching your eyes, nose, or mouth when you're out and about. We're only about halfway through flu season, folks. Waiting it out just won't cut it.

Editor’s note: This post has been updated from its original version

More Like This
Here's Why Your Vagina Burns After Sex
Why Is My Vagina Itchy? Experts Explain
Doctors Swallowed LEGOS To Prove Everything Is Awesome For Kids Who Do The Same
14 Recipes For Sick Kids When Everyone's Tired Of Canned Soup & Crackers
What Parents Are Talking About — Delivered Straight To Your Inbox