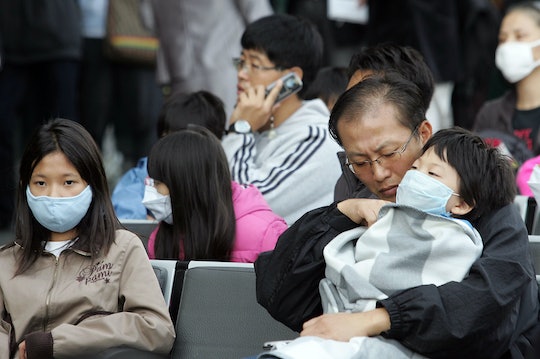 Turns Out, Testing For The Flu Doesn't Take As Long As You Think

I am the recent inhabitant of the flu B virus. Saturday afternoon, I was out with my family, happy and cheerful, and when I got home that night, an invisible Thor hammer slammed into me, knocking me for a loop and making me miserable. I was achy all over, I couldn't stand up for the dizziness, and the chills were like earthquakes all over my body. Early in the week, my doctor said she thought I had flu B based on symptoms. After a quick pop-in at her office, it was confirmed. But, how long does the flu test take? Is it the same for everyone?

Rapid influenza diagnostic tests (RIDTs) are a quick, swab-based test that most providers use to diagnose flu. Some — not all — are also used to determine the strain, be it flu A or flu B. These tests take about 15 minutes, give or take, depending on the lab and speed of persons running the test, but it's pretty routine at this point according to the Centers for Disease Control and Prevention (CDC). However, the strength, reliability, and scope of these tests are not always optimal, and the CDC noted that it can be affected by external influences such as the progression of the illness and if exacting procedures during the test have not been followed.

Let me tell you how it went down for me. First, I went into my doctor's office after dragging my sick behind the requisite 15 blocks. The doctor's office was full to bursting with people who looked like they were also hit by an enormous hammer, and it seemed as though the blow caused many of them to leak from every hole on their face. I wore a surgical mask, sunglasses, a layer of hand sanitizer, and I kept far away from the other patients because I didn't want an additional flu virus. One flu will more than suffice, thank you very much.

My poor, beleaguered doctor took my blood pressure, which was higher than normal but not dangerous, listened to my lungs and my heart, and other standard check-up procedures. She then took my temperature. That was the real kicker. Watching the digital thermometer, I kept picturing it as a cartoon mercury thermometer which would explode at the bulbous red tip. It was really high for me — 102 degrees. I don't remember the last time I had a fever that high. Yet, I was freezing. I put my feet on the office's radiator, and I still shivered in my huge down coat, but my face was on fire like I did three shots of Jager. She then shoved a stick in my mouth with more vigor than I would've liked.

She went on to say, "I know you have the flu, but let's see which one for posterity." Posterity? Like I cared about posterity when I was clearly going to collapse from cold and vague existential dread while lying on her table, coat hood fully pulled over my face. I mean, I get that she wants to know what's in the area, and likely reports the numbers to the New York State Department of Health, but I was miserable. But that's the thing. If there's flu in your area, the test isn't always necessary, according to the CDC. It's just nice to have.

About 17 million minutes later, she came back and confirmed with me that I had flu B — the ugly stepsister to the H3N2 virus. I didn't care. I just wanted her to knock me out for several days until I felt better. I wasn't opposed to a medically-induced coma if that's what it meant. Alas, I got fluids and matzo ball soup as a prescription. Lame. In actuality how long does a flu test take? Mine took less than 15 minutes, but they felt like a lot longer.