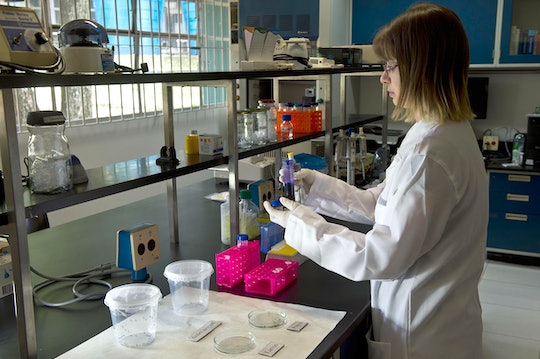 It all starts with a mosquito bite. About 20 percent of people bitten by mosquitos carrying Zika get affected by Zika virus and can expect a rash, fever, joint pain, and conjunctivitis within two to seven days of the bite. Thankfully, specialists said that how long Zika virus lasts hasn't varied much in those affected. Last week, the Centers for Disease Control reported that the virus lasts about a week. The CDC's latest report on Zika also states that the virus "can also be transmitted from a pregnant mother to her baby during pregnancy or around the time of birth," which, understandably has pregnant women scared. The CDC does not have any more information about how and why Zika is transmitted from mother to baby, or in other words, how commonly this occurs.

Because there's no vaccine for Zika virus and just not enough information about how the virus can affect a developing fetus, the CDC issued a travel alert (Level 2-Practice Enhanced Precautions) for pregnant women or women planning to become pregnant. But, let's not panic people. The good news, according to the CDC, is that the virus doesn't linger in your body after it's run its course. According to the latest CDC findings:

Zika virus usually remains in the blood of an infected person for only a few days to a week. The virus will not cause infections in a baby that is conceived after the virus is cleared from the blood.

So, for those infected, once the virus has run its course, it will not "pose a risk of birth defects for future pregnancies," according to the CDC.

However, for countries with high rates of the virus, like Brazil, which has been hit the hardest by Zika virus and El Salvador, where public officials have warned women against getting pregnant, the health department is taking a more aggressive stance against the virus. According to Al Jazeera, because of the rapidly spreading rates of the virus in South American countries, and the lack of information about possible birth defects the virus might have on developing fetuses, (namely the risk for microcephaly, or "brain shrinkage") people are justly concerned.

It's a scary thing when women have government officials making declarations about when it's safe for them to decide to start a family. But that's just what Eduardo Espinoza, the El Salvator's vice-minister of public health did on Thursday, according to Al Jazeera:

We'd like to suggest to all the women of fertile age that they take steps to plan their pregnancies, and avoid getting pregnant between this year and next.

I have to say, this is super scary stuff about a virus that, up until a year ago, no one at the CDC was even paying attention to.

It was only by examining a connection between microcephaly and the rise of mosquitoes in Brazil, that doctors discovered the virus, according to Vox.

As of Friday, Zika was most prevalent in the Americas, but Friday also marked the first case of Zika reported in the U.S., so if pregnant women might want to stock up on bug spray, which the CDC said was safe to apply during pregnancy. And, of course, follow the travel guidelines set by the CDC as more information about Zika virus is gathered.

More Like This
OB-GYNs On How The End Of Roe Changes How They Can Care For Us
Princess Charlotte Is Ready To Be A Soccer Star, Too
I'll Be First In Line To Vaccinate My Kids, But I'll Never Forget That We Were Last
How To Breastfeed A Baby With A Cleft Lip Or Cleft Palate