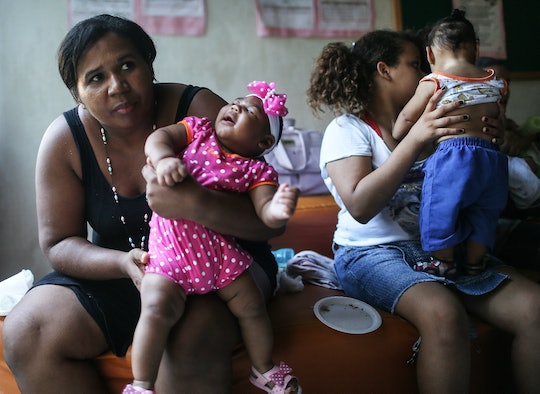 How Long Does Zika Virus Stay In Kids' Systems? Anyone Can Be Susceptible To Its Effects

It is now officially nine months into 2016 and Zika — a virus present in Aedes Aegypti mosquitos — has shown that it isn't going away anytime soon. Now that autumn weather is starting to arrive, people might be spending more time indoors but people, especially children, can still be vulnerable to catch Zika. As more research continues to emerge, things like how long does Zika virus stay in kid's systems proves how there is so much that needs to be addressed.

Unfortunately, because the virus is now just getting its turn in the spotlight, there isn't much research done on how long the virus can stay in kids' bodies. While much attention has been focused on infants who can catch the virus from their mothers during pregnancy or how the virus can effect adults, there is not much information online that points to how long Zika can stay in a kid — from toddler age to adulthood. According to The Atlantic, researchers are only just now beginning to understand the mechanics of the virus on children's brains and their systems. "If a Zika infection happens in the first trimester, it's devastating," scientist Forrest Gulden told The Atlantic. "It's really, really bad. The more you go to adulthood, the less severe the symptoms are, but Zika still might even paralyze and we've seen it kill a person."

For most people, Zika can typically last in the blood stream for up to a week before resolving and last a little bit longer in saliva and urine, according to CNN.

According to The Atlantic this means that "certain health risks may dissipate as a person gets older but others may emerge." But parents should feel assured knowing that Zika hasn't made itself present for the long term in older kids. According to NPR, the symptoms associated with Zika — rash, fever, and muscle pain — which typically lasts for up to one week in adults, also presents itself similarly in children. "There haven't been any reports that suggest that Zika causes more severe symptoms in children or infants," David Vu, a pediatric infectious disease specialist told NPR. Additionally, Vu told NPR that not enough research had been done to know it's longterm effects on children.

On the other hand, one new case points out that Zika can lay dormant in toddlers. According to CNN, a letter published in the New England Journal of Medicine points out that one Brazilian baby had Zika virus lay dormant in it's blood for 2 months before testing positive. Therefore, it is important to read these cases and draw a conclusion knowing that more research has to be done and knowing how unpredictable Zika continues to be.

The key is to this is preventing kids from catching Zika altogether. As kids begin to spend more time outdoors during recess or cheerleading on the sideline during the football game, the more vulnerable they are to mosquito bites. According to People bug sprays containing picardin or DEET work well in warding off Zika carrying mosquitos. The CDC also recommends parents dressing their children in clothing with long sleeves that cover arms and pants that cover their legs.

While this new report about Zika's dormancy is shocking, it does make one very good point — there is so much people don't know about Zika and are continuing to learn about every day. Zika can spend a week in the bloodstream or up to two months in one instance — the safest way to avoiding this uncertainty is preventing kids from catching it altogether.