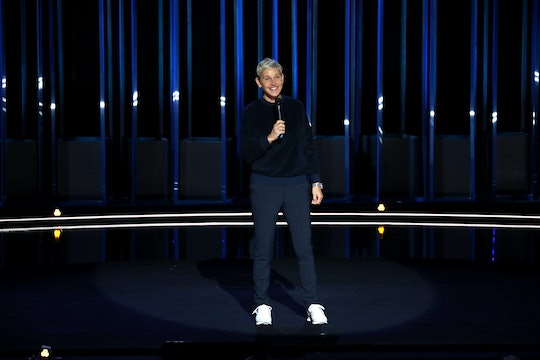 With all the Christmas movies dropping this month, comedy legend Ellen DeGeneres figured she'd better put her own comedic voice into the mix. So this week, she dropped her very own Netflix Christmas movie! OK, OK, I'm just kidding. But she did drop a new Netflix comedy special called Ellen DeGeneres: Relatable this week. If you're considering checking out the comedian's special, you may be wondering: How long is Ellen DeGeneres' Netflix stand up special?

If you want to get specific, Ellen DeGeneres: Relatable runs for one hour, eight minutes, and 11 seconds. So basically, a little more than an hour. It's the perfect length of time for when you want to watch a movie, but don't have the concentration to pay attention to something too long. (That's not only me, right?)

As DeGeneres explains in the opening moments of Relatable, it's been 15 years since she last did stand up. That seems like a long stretch of time for such a famous stand up comedian — but it makes sense when you think about her talk show, The Ellen DeGeneres Show, which premiered in 2003. On her talk show, DeGeneres cracks plenty of jokes — in her monologue, while interviewing celebrities, and when playing hilarious games with her guests. So in case you were confused, even though DeGeneres has been taking a break from stand up, she hasn't taken a break from comedy. And that's evident by the sharp jokes in Relatable.

DeGeneres herself makes fun at the title, Relatable, in the first few minutes of the special. She explained that her friend said he thought her stand up would no longer be relatable after all these years. So, she poked fun at her very relatable lifestyle, which she joked is filled with butlers who hand-feed her, gold toilets in enormous bathrooms, and breakfast enjoyed in her personal solarium.

On Tuesday, the comedian sat down with Today’s Savannah Guthrie to talk about her return to the stand up stage. “I didn’t think I’d ever do it again,” DeGeneres told the host, as People reported. “I did it for so long, I did it for probably 20 years and it’s a lonely life — especially as a woman by yourself on the road.”

DeGeneres is probably feeling happy with her decision to return to comedy, because critics are loving the Netflix special. "All of these contradictions make Relatable a fascinating piece, and one that only DeGeneres could pull off—a testament to the potency of the new voice she’d find eventually, long after Carson first beckoned her onto his couch," Vanity Fair's Laura Bradley wrote.

And according to Dennis Perkins of The A.V. Club: "Ellen is still Ellen, and if her occasional feints toward soul-baring comedy give way more frequently to innocuously amusing bits about shoe shopping, toothpaste, bathroom attendants, and the like, it’s not inconsiderable how the comic broadens her trusty stand-up palette."

Ellen DeGeneres: Relatable is now available for streaming on Netflix.