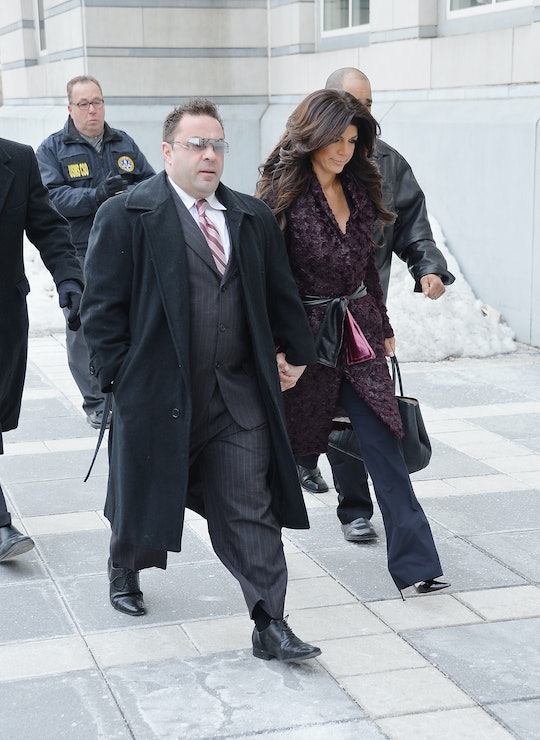 This Is How Long Joe Giudice Will Be In Prison For

The Real Housewives of New Jersey has survived a federal prison sentence for one of its original cast members, and while Teresa Giudice is still standing, her future with the show remains uncertain. Now released from prison and home with her daughters, Teresa must wait for her husband Joe Giudice to finish his stint at FCI Allenwood in Pennsylvania. So how long is Joe Giudice's prison sentence? A judge staggered the couple's sentences, so that their children could remain in the custody of one parent at all times.

In March of 2016, Joe self-surrendered to begin his prison sentence at FCI Fort Dix in New Jersey before being transferred to the Pennsylvania location at the end of 2017. He was sentenced to 41 months in prison, which comes out to a little under four years. Unfortunately, that wasn't the family's biggest hurdle. Since Joe is an Italian immigrant who entered the United States as a baby, there was a chance that he could be deported after being charged with a federal crime. During last season's RHONJ reunion show, Teresa infamously said that she "wouldn't mind" if Joe was deported, even though it would mean uprooting her daughters.

“I mean, Italy’s a beautiful place to live," she said at the time. "I wouldn’t mind, you know, I’m just saying. Listen, whatever God has planned for me, that’s what’s going to happen. I will embrace it the best I can."

Unfortunately, in October of 2018, an immigration court judge ruled that Joe will, in fact, be deported back to Italy after serving out the remainder of his sentence. "Based upon the law, I find you deportable and ineligible for any kind of relief," Judge John Ellington said at the October 10 court hearing, according to Radar Online. "Mr. Giudice, no matter how this turns out, I wish you the best. I decided this case as a matter of law."

Joe's attorneys filed an appeal in November, but there hasn't been any word yet on the outcome of that decision. Gia, the eldest Giudice daughter, memorably posted an Instagram tribute to her dad after the news of his forthcoming deportation was announced, saying, in part:

We have so many plans to do as a family when he gets out. I need my father to be here. My father belongs with us and his entire family. My father came into this country when he was one years old, the United States is the only country he knows, spread the word #bringjoehome.

The toll of their parents' prison sentences has been a huge part of the girls' RHONJ storylines since Teresa and Joe were first indicted on charges of mail, wire, and bankruptcy fraud. Gia, 18, stepped into a motherly role as soon as Joe was on his own with the girls, while Audriana, 10, became increasingly clingy. Melania, 14, had the closest relationship with Joe and struggled the most with his long prison sentence, according to her mother. Gabriella, 15, has remained off-camera for this season of RHONJ. New episodes air Wednesday nights on Bravo.