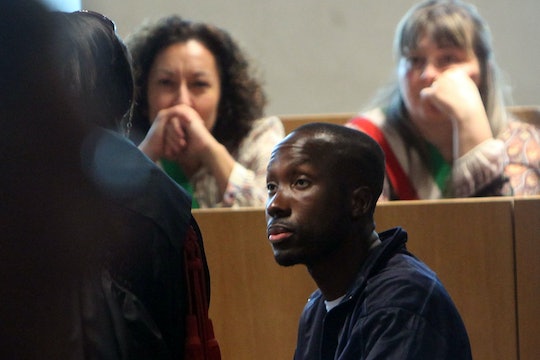 How Long Is Rudy Guede's Sentence? The Amanda Knox Trial Suspect Could Be Free Soon

Though the most famous suspects in the murder of Meredith Kercher in Italy in 2007 were Amanda Knox and her then boyfriend Rafaelle Solecito, there was a third who was charged in the murder. Rudy Guede's DNA and fingerprints were found in the murder room as well as Kercher's body, and he was convicted of the crime. Unlike Knox and Solecito's convictions, his actually stuck, and remains to this day. So, how long is Rudy Guede's prison sentence? He was originally sentenced to 30 years in prison, but his sentence was reduced to 16 years after a receiving a fast-track trial.

Interestingly enough, Guede might not even have to wait 16 years before his release. He could be eligible for parole as early as 2018, plus good behavior often sees criminals leaving their confinement earlier than originally planned. One thing we do know is that the case is officially closed, so there will not be another opportunity for any of the previous suspects to be put on trial, for a third time.

At this point it will probably be impossible to determine exactly what happened the night Meredith Kercher was killed, as the case has gotten more confusing as the years have gone by. Nearly everyone's story has changed at least once, and Guede is no exception. He, at one point, stated that Knox had nothing to do with the crime, but in an interview from January of 2016, The Daily Beast writes that he claims to be 101 percent sure that Knox was in the house at the time of the murder.

Despite the rise in true crime lately, this case seems to have an ending. Right now, someone, who was proven to be connected to the crime via DNA evidence, is currently serving a sentence for Meredith Kercher's death. It might not seem to be an answer that matches the amount of attention the case got when it first happened, but for the sake of the Kercher family, hopefully there is some peace in the fact that there are answers.

If Guede does get out of prison early, it will be interesting to see what he chooses to do with his life — and what he'll have to say now that his sentence will be over. Will his story change yet again, or will we finally hear answers that some have been waiting years for?