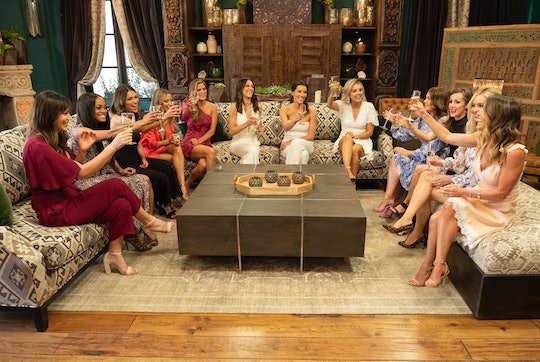 The 'Bachelorette' Reunion Gets Nearly All The Former Stars Back Together

According to E! News, the special installment will reunite fans with Trista Sutter, DeAnna Stagliano, Jillian Harris, Ali Fedotowsky-Manno, Ashley Rosenbaum, Emily Maynard Johnson, Desiree Siegfried, Andi Dorfman, Kaitlyn Bristowe, JoJo Fletcher, Rachel Lindsay, and Becca Kufrin, all of whom will sit down together to dish on their experiences. They'll also share their thoughts about Hannah as the new Bachelorette and the unique journey they think she'll face.

Meanwhile, Chris Harrison will be taking viewers on a tour of the franchise's most memorable date spots, with Bachelor Nation super fans leading the way. Fans will even get a sneak peek into Rachel Lindsay and Bryan Abasolo's wedding prep as she welcomes cameras into her bridal shower. But this barely scratches the surface on all the stuff the reunion special plans to cram in.

The girl-power-heavy special will also bring back some of The Bachelorette's most controversial male contestants for sit-down interviews, and fans will get an MTV Cribs-style glimpse into Hannah's home life, led by Harrison. Aside from that, the franchise's longtime host is having just as many proud dad feelings as you'd expect seeing almost all the former Bachelorettes back together again.

“I knew it was going to be fun to get all these former Bachelorettes together but I wasn’t prepared for how touching and meaningful it was for me," Harrison said in an interview with Us Weekly. "To see them all together talking and sharing stories about their lives and their seasons really filled my heart full of pride."

Several of the Bachelorettes in attendance echoed that it was a surreal and surprisingly moving experience, but they didn't shy away from the show's more difficult aspects, either.

Rachel, the franchise's first black lead after 21 seasons of The Bachelor and 12 seasons of The Bachelorette, spoke out on how deflating it felt to be the only woman of color in the room in the same Us Weekly interview. But, she went on to acknowledge that the Bachelorettes who came before her faced all kinds of backlash of their own, even if it wasn't racial. "They started this journey at a time when it wasn’t popular to be the Bachelorette," she explained. "America was not as accepting to see a woman in this role the way they were accepting of men."

Hopefully, The Bachelorette Reunion will make space for a conversation about the culture around the show and how it's changed over the past two decades. If nothing else, it would make for compelling television to watch alums who'd been treated poorly during less socially conscious TV eras finally speak their piece.