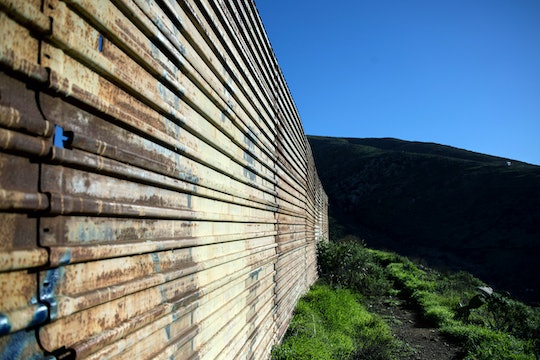 How Long Is The Border Wall Already?

Amid the Trump administration's recent efforts to make the wall between the United States and Mexico a reality are relevant inquires as to the status of the border at present. In weighing the need for such a structure, many are asking: How long is the border wall already? Is a longer, taller wall truly a primary concern?

Currently, the border wall is about 700 miles long — covering a little over a third of the roughly 1,900 mile expanse that runs between the United States and Mexico. The Telegraph notes that the remaining area that is unfenced is "either open, nearly impossible to actually build on or impassable." A variety of materials compose the current border, including "mesh, chain link, post and rail, sheet piling, concrete barriers for vehicles and X-shaped steel beams for livestock," notes ABC News.

The idea of building a wall to secure U.S. borders didn't originate with Trump. In October of 2006, President George W. Bush signed the Secure Fence Act, combining "physical barriers" with surveillance technologies in order to "make our borders more secure." By May of 2011, President Barack Obama stated that the wall was "now basically complete." He foreshadowed Republican reception of the wall, however, speculating:

They'll want want a higher fence. Maybe they’ll need a moat. Maybe they want alligators in the moat. They’ll never be satisfied. And I understand that. That’s politics.

Some members of Trump's own party, though, oppose his belief that a wall would be the cure-all to illegal immigration. "Building a wall is the most expensive and least effective way to secure the border," shared Texas Republican Rep. Will Hurd. "Each section of the border faces unique geographical, cultural, and technological challenges," Hurd explains, advocating instead for a "flexible, sector-by-sector approach that empowers the agents on the ground with the resources they need."

Currently, different parts of the existing border wall look completely unique from one another, which, as Hurd seems to confirm, is absolutely intentional and even beneficial.

Conflicting information as to whether Trump or not actually intends to impose a 20 percent tax on Mexican imports to fund the wall aside, there are certainly varying approaches and recommendations as to how to build a wall and why. To many, it's a total lost cause — one that's "pointless, ineffective, and wildly expensive." Mexico's President Enrique Peña Nieto is certainly not a fan of the proposed border, sharing "I regret and condemn the United States’ decision to continue with the construction of a wall that, for years now, far from uniting us, divides us," and canceling his upcoming meeting with Trump.

For many, the border is not a pressing concern, and definitely not one worthy of such a high, $15 billion price tag.