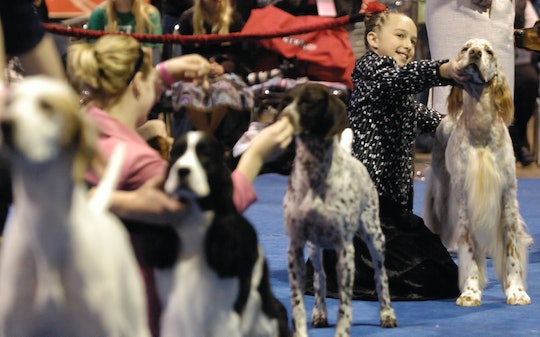 If you're looking for some relaxing plans on the first day of 2020, I'm happy to report that the dog show that airs on New Year's Day is long enough to keep you occupied on your sofa for several hours. The 2019 AKC National Championship Dog Show is set to air on Wednesday, Jan. 1 and it's pretty much guaranteed to be exciting every step of the way.

The American Kennel Club hosts the AKC National Championship Dog Show annually, but this year is said to be one of the biggest dog shows in the world, thanks in part to the more than 5,200 dogs from all 50 states (in addition to Washington, D.C. and Puerto Rico) that were entered in competitions.

Viewers at home can get a taste for the size of the show and the though competition when they tune in to the 2019 AKC National Championship Dog Show on New Year's Day on Animal Planet at 6 p.m. It's a viewing experience that will certainly require some snacks — the broadcast is three hours long, according to Animal Planet. But, there are quite a few exciting things that will happen during the duration.

The broadcast of the show — which is previously taped; the actual competition was held in mid-December — will give a behind-the-scenes look at different dog actions sports and events, in addition to showing the final competition for Best In Show. It's easy to see why this broadcast might be as long as it is — thousands of dogs were entered in the two day long competition held this year in Orlando, Florida. It's hard enough to capture all of the excitement from the weekend, and shoving a very exciting 48 hours into a three hour long broadcast doesn't sound easy. But people will be able to see all of the highlights from the weekend during the broadcast on New Year's Day.

Watching three hours of super well behaved and well groomed dogs prance around on the TV sounds like the perfect way to spend the first day of the new year. But, if anyone ends up missing any part of the show throughout the night, they can easily watch it at another time. An encore of the dog show will air at midnight on Jan. 2 (for all of those night owls), according to a press release, but it will be airing online afterwards on AKC.tv.

New Year's Day is a day spent to rest and relax before the year ahead. There is no better way to do just that than by watching the annual broadcast of the AKC National Dog Show.