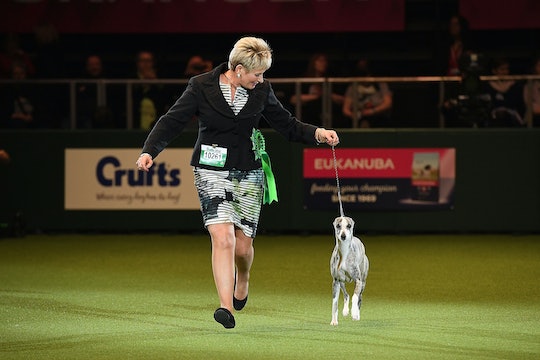 Get This: You Can Spend Hours On New Year's Day Watching A Dog Show

One of the most popular things to do on New Year’s Day, either while nursing a hangover or just enjoying a weekday off of work, is watching TV. Specifically, football seems to be a popular choice, but if you’re like me, a much cuter competition would be preferable. Enter the AKC National Championship Dog Show, airing on Animal Planet. If you’re wondering just how long is the dog show on New Year’s Day, well then, wonder no more.

There is a whopping four hours of exciting canine fun that airs beginning at 6 p.m, ET. (There’s also a repeat airing at midnight for all of you night owls, but I’ll be fast asleep by then.) Or, you can watch the special at a later date, as it will be available on the Animal Planet GO app, which you can log in to with your television provider information. So if you’re too tuckered out from New Year’s Eve festivities to make it through the whole thing, don’t fret — you can find out who the big winner is at another time.

The American Kennel Club is responsible for this and all of the other super official U.S.-based dog events each year. Of course, they like to jazz things up by getting celebrities on board in order to bring in more eyes, and this year is no exception. Get ready for a star-studded event, featuring big names in sports and entertainment, all of whom are well-known dog lovers.

First up is Mario Lopez, who will forever be AC Slater from Saved By The Bell to us Millennials, but is now better known for being the host of Extra and, like, a million other things. His adorable French Bulldog, Julius Caesar Chavez Lopez, is both a talented DJ (see below) and the celebrity rep for the non-sporting group (which also includes popular breeds such as Poodles, Chow Chows, and Dalmatians).

Next up is Shawn Johnson (East), America’s favorite gymnast from the 2008 Olympics. These days, she spends a lot of time making YouTube videos with her husband, Andrew East, who plays for the NFL. Johnson East and their adorable golden, Nash, will be representing the sporting group, which is where some of the most athletic competitors, like Labrador Retrievers, are categorized.

This one is for Twilight fans (yes, I know you’re out there, no need to be embarrassed). Emmett Cullen himself, Kellan Lutz, will also appear at the dog show, along with his beautiful Australian Shepherd, a member of the herding group. Lutz hasn’t had a major role in a big production since his vampire days, but he does have a part in the upcoming Taraji P. Henson comedy What Men Want, so catch him at the dog show before he (hopefully) blows back up.

No matter your preferences in breed, everyone is #TeamDog. And we’re definitely all #TeamTara: The popular Twitter account WeRateDogs recently shared photos of a black lab who was born without one of her paws. How cute is that? All in all, this is shaping up to be a pretty terrific event, so I wouldn’t miss it.