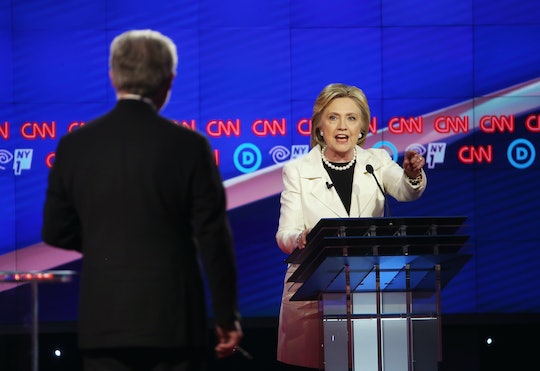 How Long Is The First Presidential Debate? The Debate Will Only Last 90 Minutes

Although watching Democratic nominee Hillary Clinton and Republican nominee Donald Trump on stage in a political setting for the first time will be exciting, there is only so much politics and arguing that people can handle in one night. Luckily, the first presidential debate shouldn't take too long or be too boring for those watching at home — because the debate will be split up into segments. The first debate will be comprised of six segments, lasting 15 minutes each, according to the Commission on Presidential Debates. The debate will last 1 hour and 30 minutes long, according to U.S. Presidential Election News. TV Guide has the debate listed to be running for 2 hours on certain networks— however, it is to be assumed that the networks will give themselves the extra 30 minutes for political commentary after the debate is over.

This first debate will be held at Hofstra University in New York and moderated by NBC's Lester Holt. According to statistician Nate Fox, whose website FiveThirtyEight gathers all information from every single presidential poll, Hillary Clinton is currently leading Trump by 1 or 2 percent nationally. A good performance by either one of the candidates could change the way the polls look and potentially effect the ultimate outcome of the presidential election.

These debates will be long enough for voters to get an idea of where each candidate stands on important and topical issues. Only voters have the potential to effect their futures — every debate watched and every ballot cast counts.