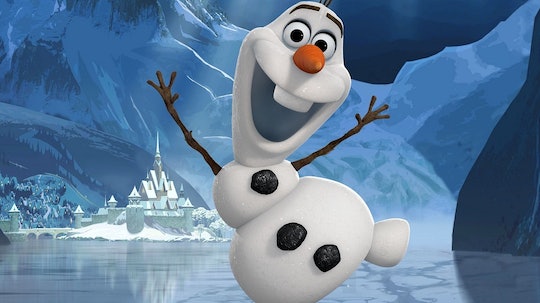 People Are Pissed About The 'Frozen' Short Before 'Coco'

So you've taken your family to the movies to see Coco. (Or maybe you've gone by yourself! Hey, Pixar's for all ages.) You've gotten your popcorn and settled into your seat, excited for one of those bite-sized, heartfelt Pixar shorts before the main event. And then the characters from Frozen appear, and just... stay... on-screen. Wait. How long is the Frozen short before Coco? Olaf's Frozen Adventure clocks in at a whopping 21 minutes, and many audiences are simply not having it.

When most people think of a Pixar short, they tend to picture something between the five and seven-minute mark, not something that's practically the length of an entire episode of Friends. Past Pixar shorts have been relentlessly inventive and exciting — like the recent, critically acclaimed Sanjay's Super Team, in which a young Hindu boy imagines a melding of his favorite superheroes and the traditional Hindu gods — or deceptively simple — like the visually stunning, Oscar-winning Piper, about a baby sandpiper learning to fend for himself. In contrast, it seems that many found Olaf's Frozen Adventure to be merely 21 FULL MINUTES of watching some of Disney's most commercially successful characters go on a low-stakes, overly long adventure meant to psych audiences up for the impending Frozen 2, all while audiences were actually psyched up for Coco, and wondering why it wasn't starting already.

Needless to say, many on Twitter were not pleased:

So what's the plot of this "short" anyway? Apparently, now that Elsa (Idina Menzel) no longer has a pesky curse preventing her from getting in the holiday spirit, she and Anna (Kristen Bell) want to celebrate Christmas, but don't really know how. So Olaf, the friendly snowman sidekick voiced by Josh Gad, sets off on a mission to find the best holiday traditions in all the land. Along the way, the film gives audiences four new musical numbers. Also, Olaf eats a fruitcake and it immediately falls out of his butt. Comedy!

According to Marissa Martinelli's review of Olaf's Frozen Adventure over at Slate:

Watching the character flit from one gag to another soon becomes exhausting... That kind of comic relief only works when there's some kind of tension to relieve; when it's thrown at you all at once, it feels like an increasingly desperate one-man show.

According to Vox, Disney did not screen the Frozen short in front of Coco when critics went to see it, which is never a good sign. It also seems, according to IndieWire, that the featurette was originally intended to be an ABC holiday special, and then was awkwardly repurposed as a Coco warm-up. And according to some on Twitter, many Mexican movie theaters pulled the short altogether after audience complaints.

Some Pixar acolytes are particularly upset by the short because they see it as further evidence that Disney's acquisition of Pixar is pushing the scrappier, stranger studio into the more commercial realm of sequels and merchandise.

Olaf's Frozen Adventure does have its defenders. It's a safe bet that, if you've got a kid whose favorite pastime is whirling around your house while belting out "Let It Go," he or she will be thrilled to get some bonus time with Elsa and friends.

Even Martinelli admitted in her Slate review that, as the children in the theater giggled around her, she found herself falling for the movie's manipulation, writing:

I could feel my defenses breaking down, weakened by the animation, which was now imitating the fabric of a Christmas sweater, and by the bubbly melody of a song I was already forgetting, even as I was still listening to it... I was enveloped by a pleasantly bland haze, one that had been carefully fine-tuned and focus-grouped and optimized to sell the most possible merchandise.

Still, this tweet wins the entire conversation about it:

If you're not a big Frozen fan, prepare yourself. And hey, maybe you have time to wait in that long popcorn line after all.