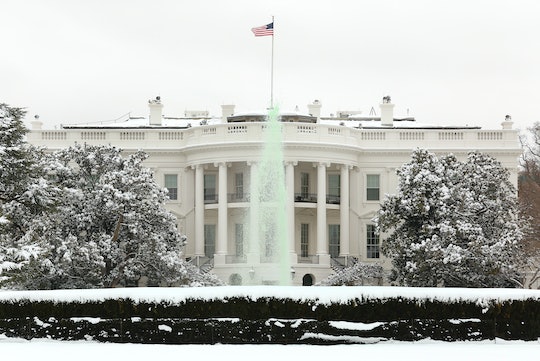 The Inauguration Is Not A Short Event

The inauguration of President-elect Donald Trump is just around the corner, and yet many details are still unknown. Those who are planning to watch the even on TV – or avoid it during a long, Clinton-esque stroll in the woods – are wondering, how long is the inauguration? Technically, it's a three-day long series of unfortunate events, but the actual swearing-in ceremony itself will begin at 9:30 a.m. Eastern Time on Friday, Jan. 20, and is expected to wrap up around 3:00 p.m. Eastern Time in the afternoon.

Newsweek reported the full schedule, which begins on Thursday, Jan, 19 at 3:30 p.m., when Trump and Vice President-elect Mike Pence will participate in a traditional wreath-laying ceremony at Arlington National Cemetery in honor of the nation's veterans. Fun fact: that's where Captain Humayun Khan is buried. Wonder if his amazing dad, Khizr will be there?

Later in the day, a "Make America Great Again! Welcome Celebration" is planned, but there are almost no details whatsoever. It's set to take place at the Lincoln Memorial at an unspecified time, and promises a "diverse group of performers" giving a concert. Trump and Pence are thus far the only actual names attached to the event (to be clear, they'll be speaking informally, not performing).

The swearing-in ceremony will begin on Friday at 9:30 a.m. at the U.S. Capitol. Presidents Bill Clinton, George W. Bush, and Jimmy Carter will be in attendance, along with former first lady Laura Bush and former Secretary of State Hillary Clinton. If she brings a thermos full of wine, I do not blame her. The Mormon Tabernacle Choir and former America’s Got Talent contestant Jackie Evancho will perform, opening remarks will take place at 11:30 a.m., and the man who was fired from hosting NBC's The Apprentice will put his hand on the Lincoln Bible at noon. According to inauguration committee chair Tom Barrack, the plan is – and I'm not making this up – to "surround" Trump with "soft sensuality." It's unclear exactly what time the water in the reflecting pool might turn to blood, but my money's on 12:05.

After taking the oath to preserve, protect, and defend the Constitution of the United States, Trump will give his formal inaugural address. It's unknown how long the speech will be; every president has made one, but they've varied in length from just 135 words to a stunning 8,445. Given Trump's fondness for the spotlight, he just might try to break that record. Once it's over, the Obamas will flee by helicopter. A parade featuring the Radio City Rockettes will follow at about 3:00 p.m. (or whenever Trump finishes speaking), and is expected to last about an hour and a half. Three balls are planned for the evening, all headlined by mystery entertainers once again. Finally, an interfaith prayer service will be held at the Washington National Cathedral on Saturday, Jan. 21 at 10:00 a.m. Meanwhile, five miles away, a quarter of a million Americans will be gathering to protest Trump and everything he stands for.