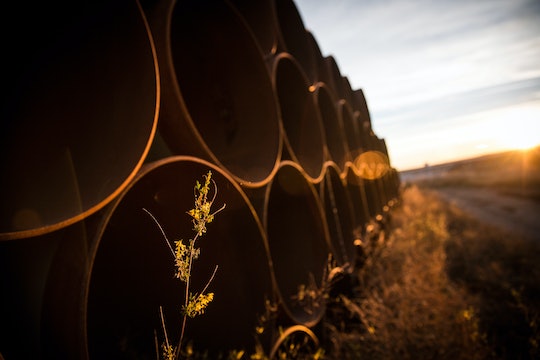 How Long Is The Keystone XL Pipeline?

During his first days in office, President Donald Trump has made a number of sweeping changes. On Tuesday, he approved the construction of two hotly-debated oil pipelines, the Dakota Access Pipeline, which is set to pass through sacred Standing Rock Sioux land, and the recently less-talked about Keystone XL pipeline, which will run from Alberta, Canada, to Nebraska. So just how long is the Keystone XL pipeline? The new construction will stretch for 1,179 miles, according to the BBC, but that's not exactly the end of it. After carrying the oil from Canada to Steele City, Nebraska, it will meet up with a network of existing pipes. From there, it will travel to the Gulf Coast, where it will be refined and exported.

There is already a pipeline between Alberta and Nebraska, called Keystone, but the new one will follow a more direct route than the original. When the new pipeline was originally conceived in 2010, the United States was struggling with low oil supplies, according to The New York Times, and Canada was preferable to other foreign suppliers. Since then, however, U.S. production has improved dramatically, so the oil traveling the Keystone XL –up to 830,000 barrels a day – will most likely be sold to other countries.

Proponents of Keystone XL argue that it will reduce U.S. dependence on foreign oil from the Middle East. In 2015, the U.S. imported 1.06 million barrels of petroleum per day from Saudi Arabia, which accounted for 11 percent of its total imports. Crude oil accounts for 78 percent of all petroleum imports. Canada is already the top foreign petroleum supplier to the U.S. Supporters of Keystone XL also credit it with creating jobs. The construction itself is estimated to create about 42,000 temporary jobs, but according to Politifact, only 50 long-terms jobs are expected.

Critics of Keystone XL have the usual complaints: creating more fossil fuels encourages dependence on them, rather than looking for alternative energy sources, and of course, there's a risk of spills. On Wednesday, a pipe ruptured in Iowa, spilling 138,600 gallons of diesel fuel, according to the Guardian. Additionally, the oil produced from Canada's tar sands is particularly thick, and therefore requires more energy to extract, leading to more carbon emissions. It will still take some time before construction can commence, however, because the State Department must first approve the application from the manufacturer, TransCanada, and Trump is looking to renegotiate the deal. Who knows how long that might take.