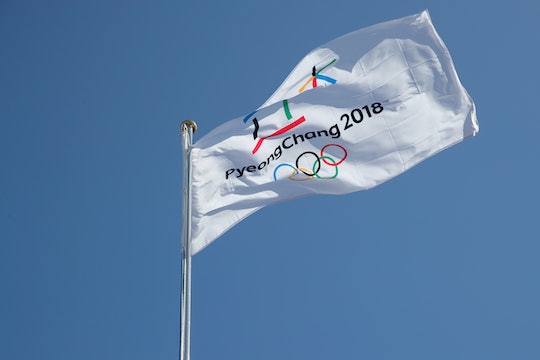 If The Opening Ceremony Feels Like It's Lasting Forever, It's Because It Is

The 2018 Winter Olympics will officially begin in Pyeongchang, South Korea, Friday, and that means that the always highly anticipated opening ceremony is only days away. How long is the opening ceremony? It's expected to run about two hours, according to TIME, but with the time difference taken into account, this year, American Olympic fans will end up watching the event over breakfast — the 8 p.m. local start time is 6 a.m. EST. That might be an early morning for some, but it sounds like there will be lots worth tuning in for.

For one, the 2018 Winter Olympics will mark the first time the winter games have ever been held in South Korea, according to The Guardian, though Seoul did get to host the summer games in 1988. That means viewers can expect a ceremony focused on showcasing Korean culture — including some K-pop performances! — as well as a notable emphasis on the event's "peace" theme. One detail to watch out for? During the Parade of Nations, athletes from North and South Korea will actually be marching together under one flag, according to TIME, and later, they will also compete together for the first time in the women's ice hockey event.

But what actually might end up being even more headline-worthy is the fact that, well, it's really cold in Pyeongchang right now. According to USA Today, athletes and spectators in Pyeongchang are currently facing "single-digit temperatures," along with "a brutal, biting wind" and the very real risk of frost bite. While the Winter Olympics aren't exactly supposed to be warm, after years of the games being held in milder host cities like Nagano, Turin, and Vancouver, it's thought that the last time the Winter Olympics was actually this cold was the at the 1994 Winter Olympics in Lillehammer, Norway.

Making things even more concerning for Olympic organizers though? The fact that the Pyeongchang Olympic Stadium — which cost $58 million to build, according to Reuters — doesn't actually have a roof. And that means that, at the very least, the 35,000 people expected to attend the opening ceremony are going to want to bundle up big time. And it sounds like a pretty big deal: six people were actually reported to have hypothermia after attending a concert at the stadium in November.

For those of us who will be watching the ceremony warm in our homes though — NBC will be broadcasting the games both on TV and online, according to CNN — the usual elements are to be expected. In addition to the Parade of Nations, there will be a symbolic release of pigeons (actual pigeons are no longer used as a number "were accidentally incinerated" by the Olympic torch during the summer games in Seoul, according to The Guardian), the taking of various Olympic oaths, and the customary torch relay. As for the actual show itself? The details are "kept secret" for added effect.

In this year's games, the events will actually begin the day before the opening ceremony, with alpine skiing, biathlon, curling, luge, and ski jumping beginning on Thursday, according to the Olympics website. There will also be four new events added to the schedule, according to CNN: big air snowboarding, freestyle skiing, mass start speed skating, and mixed doubles curling. 102 medals will be handed out in total.

Even if you aren't a big sports fan, there is something that is still so appealing about watching the Olympics — especially when athletes who have devoted years of hard work and dedication get to stand on the podium to receive a medal. And while the early morning wake-up required for a stateside viewing of the opening ceremony might not be everyone's idea of a good time, it sounds like those who do get up will have something pretty awesome to look forward to.