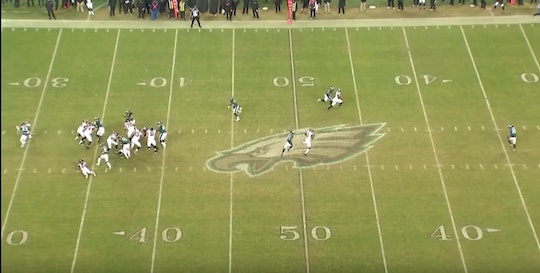 Stock Up On Snacks, Because The Super Bowl Will Be A Long Night

There is nothing more American than apple pie, country music, and football. Every February for the past 52 years, millions of people gather around their televisions in their living rooms, restaurants, and in bars across America to watch the biggest football game of the year — the Super Bowl. But the Super Bowl is on a Sunday, and any parent that knows just how hard it is to wake a kid up for school on a Monday will definitely want to know how long the Super Bowl is so they can get their kids to bed with plenty of sleep.

The Super Bowl 2017 champions New England Patriots will take on the Philadelphia Eagles in Minnesota on Sunday when they face off during Super Bowl 52. Whether or not you root for either team hailing from the east coast is a different story, because there really are so many more reasons to watch the game than just the game itself. Super Bowl Sunday is the one time of the year to eat as many chicken wings and as much chip and dip as humanly possible. It is also the only time of year where people actually tune into commercials instead of skipping them, or the channel that the commercials are on, immediately.

But people will have all of Sunday to prepare for this because the Super Bowl, which airs on NBC, won't start until 6:30 p.m., and more than likely won't end until around 10:30 p.m. This is because a typical Super Bowl lasts four hours long, according to Chat Sports. But because the Super Bowl is live television, practically anything can happen — which means it can end earlier or later than 10:30.

The average Super Bowl, according to The Verge, lasts 3 hours and 44 minutes. So if people are watching the game at their friend's house or at a restaurant, planning on staying at the place for four hours should be a safe bet. And if you're staying at your home, then you can plan on flipping through the channels, loading up on snacks, and taking plenty of bathroom breaks throughout that long period of time.

While four hours may seem like too long to sit through, there will more than likely be plenty of exciting moments that will make the time of the game go by faster. I'm talking, of course, about the half time show starring Justin Timberlake.

Instead of going to bed immediately after the Super Bowl is over, there is a lot to look forward to. Once the Super Bowl is over, whether that be at 10 p.m. or at 10:30 p.m., people can tune in to a very dramatic episode of NBC's hit show, This Is Us. While there is no telling what time This Is Us will air, according to TV Line, the network has coded the show to start at 10:15 p.m. (so it is also likely they are expecting the Super Bowl to be over at this time).