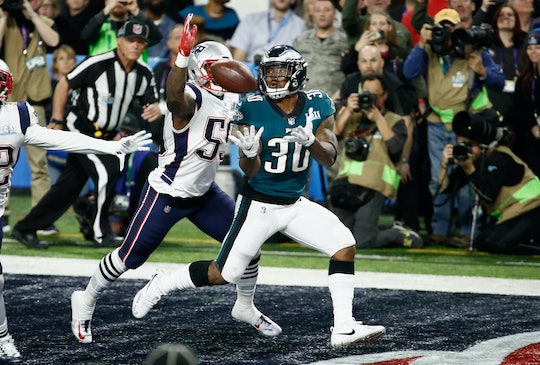 Here's How Long The Super Bowl Lasts, So You Can Go Ahead & Book A Sitter

The countdown to game day is on. While finalizing your plans for America's biggest sporting event of the year, a few questions probably come to mind. Who's hosting the party? What side dish should you bring? And, perhaps most importantly if you're hiring a sitter for the evening: How long is the Super Bowl? Here's the answer to at least one of those questions.

Even if you're not a football fan, chances are you'll be tuning in for the commercials and snacks at least. After all, Super Bowl 2018 drew in more than 100 million viewers, according to Fortune, and I doubt everyone was interested in the actual turnout of the game. So, whether you're tracking turnovers or chomping down on chicken wings, you can expect to devote a few hours to the whole ideal, not including commute time.

This year, Super Bowl 53 between the Los Angeles Rams and New England Patriots is expected to last around the same: around four hours.

The time spent on the game is about three and a half hours, according to HelloGiggles, plus 30 minutes of amazingness that is the half-time show. So with the game beginning at 5 p.m. EST, you'll want to retain your babysitter until at least 9 p.m. EST, if not 10. Consider the fact that you won't have to put the kids to bed yourself a fringe benefit of the scheduling.

Speaking of scheduling, how are those four or so odd hours actually filled? Well, the typical NFL football game clocks in at around three hours, according to USA Today, but the Super Bowl has a bit more on the itinerary. On average, the game only involves about 11 minutes of true game play within an hour of actual game time — I know, right?! — as Newsweek reported. And the rest of the four hours breaks down into time-outs, huddles, commercials, pre- and post-game festivities, and all of the other hoopla.

The halftime show — this year featuring Maroon 5 as headliner with performances by rappers Travis Scott and Big Boi — takes up a decent chunk of the game's air time. The show also draws in its own set of viewers, as well. Last year, Lady Gaga's halftime performance, which aired on Fox, had 117.5 million people watching, according to Variety, which is nearly six million more people than watched the New England Patriots defeat the Atlanta Falcons at the end of the game.

So, there you have it. This year's pre-game Super Bowl will begin at about 5 p.m. EST and last somewhere between three and four hours. That leaves you with plenty of time to catch enough of the game to pretend at work on Monday morning that you actually knew what was going on, while still rocking out to Maroon 5, eating way too much chips and salsa, and laughing at Cardi B talking about Pepsi. Schedule accordingly.