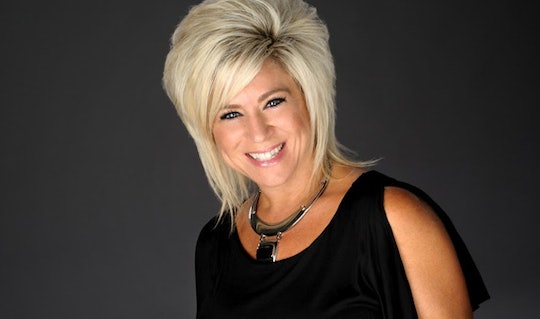 Theresa Caputo has spent nine seasons communing with spirits on Long Island Medium, and the series recently embarked on its tenth season. Though not everyone is a believer in her abilities, many are still intrigued enough to want to see for themselves what she could be capable of. But how long is Theresa Caputo's waiting list for Long Island Medium? If you want to make an appointment with her, you may be waiting a long time.

Theresa's website has a contact form, though it's made very clear that the odds of getting an appointment any time soon are slim. It explains that she was booked for two years in advance before Long Island Medium began in 2011, and she's only gotten busier since her popularity increased. Though it doesn't say exactly how many names are on her waiting list, it's described as being "very extended." Anyone who puts in an inquiry can be added to the lengthy list, but according to Theresa, that won't guarantee an appointment.

She also elaborated on how people are chosen for a reading. "The people featured on Long Island Medium are selected from all of the lists," Theresa wrote on the site, referring to those who had reached out to her in email, letters, or the online form. "Factors include location, availability, and who feels comfortable being on television are taken into consideration. Because it's just impossible to schedule so far out."

If someone was interested in either a private or group session with Theresa, they would probably be waiting for several years before they got the chance to speak with her in person. The endless waiting list is the real dilemma, because the sessions aren't as expensive as one would think. On her website, Theresa listed a reading at anywhere from $50 to $175, depending on whether it's for a single person or a group. She also made it clear that all the proceeds are donated to charity, including the Stonybrook Foundation and Meals on Wheels.

However, there are other ways to see Theresa if you're not interested in the waiting list and getting a super personal connection isn't as important to you. Theresa tours regularly and though many of her dates for Spring 2018 are sold out, there are still some seats available. A review in Philadelphia Magazine gave a detailed description of what to expect from one of Theresa's shows: it starts off with some light comedy, before she walks into the audience and starts to read the room. There's no way of knowing what she'll get from the great beyond or who she'll connect to during the show's two-hour runtime, but there's always a chance it could be you.

If none of those options are quite right for you but you still need more Theresa Caputo in your life than Long Island Medium can offer, you can always try reading one of her many books: There's More to Life Than This, You Can't Make This Stuff Up, or Good Grief: Heal Your Soul, Honor Your Loved Ones, and Leave to Live Again. It might not be the one-on-one meeting hopeful potential customers are looking for, but at least the books are readily available and they give a little more insight into Theresa's process.

It's unfortunate, but true: the waiting list for Long Island Medium's titular psychic is simply too steep for anyone looking for an immediate conversation. However, if patience is your virtue, then you can always add your name to the list and see how long it takes before you find yourself sitting opposite Theresa Caputo herself. Then you can decide if it was worth the wait.