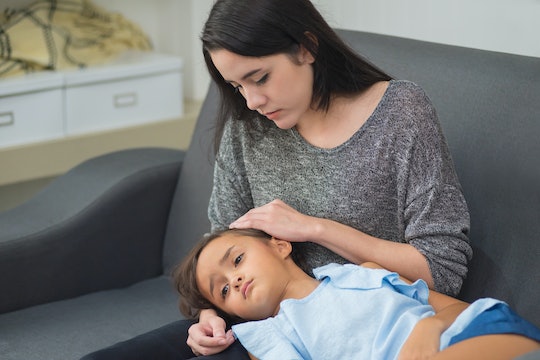 Here's How Long Your Kid Is Actually Contagious With The Flu

I've had the flu for five days. It's a miserable existence and most of the time, I've wanted to hid in my pillow fortress and huddle in until I can ambulate about without feeling as though I am being squeezed to death by a million rubber bands. Luckily, my kids have been spared thus far, but I still worry, as I know they've been exposed. If you or your child has the flu, you're probably wondering how to keep others safe. So how long is your kid contagious with the flu?

According to the Centers for Disease Control and Prevention (CDC), the length of time a person is contagious with the flu fluctuates from person to person. While most healthy adults are contagious from the day before their flu symptoms appear until about five days after their outset, children are different. Kids can be contagious for around seven days after they begin to show symptoms, and because they're so keen on sharing their germs with everyone and everything, it underscores the need to keep them sequestered from the general population and other members of the household as much as possible.

The best way to avoid exposing other people to the flu is by not getting it in the first place. Personal hygiene and a clean environment help a lot, but The American Academy of Pediatrics (AAP) suggested all children from the ages of six months and up receive the vaccine. While the flu shot isn't as effective this year as it has been in years past — hovering at about 32 percent as per the CDC — that's still better than nothing, and, according to them, people who receive the flu vaccine are less likely to be hospitalized with severe flu complications because the vaccine works to lessen the symptoms of the disease in the body.

I received the flu shot this year and still got the flu. Yes, this is anecdotal information, but I assure you, I'd do it again. Not only did my symptoms never become nearly as severe as many other of my friends who did not get the vaccine, my children and husband who were also vaccinated have thus far been spared. (I understand this may also change.) The flu knocked me down. I'm on day five, working from home, and I still have to take frequent breaks to lie down, because I'm that weak. (My choice, but I was beyond bored and I can only watch so much HGTV.)

However, my airway is clear, my fever is gone, and my headache is finally light. I can eat small meals, and even tidy up a bit. I don't know if that would be the case had I not gotten the jab.

If your child comes down with the flu, get them seen by a pediatrician, and keep them home. While it's possible to be contagious for seven days, the rule of thumb as per the recommendations of the New York State Department of Health is to keep your child home and away from others until they've been fever-free and feel well for 24 hours. I know that I've been fever-free for 48 hours, but I still feel like a White House press representative 20 minutes after a Twitter tirade has happened. Which is to say, tied up in knots and exhausted.

I'm a working mom, so I know how hard it is to keep your kids home when you have to go into the office. Taking time off because of illness is never something any of us relish, but it must be done. This flu is scary and deadly, and not everyone will have the same healthy immune system able to fight the virus off that your child may have. We're all in this together to protect each other and ourselves.