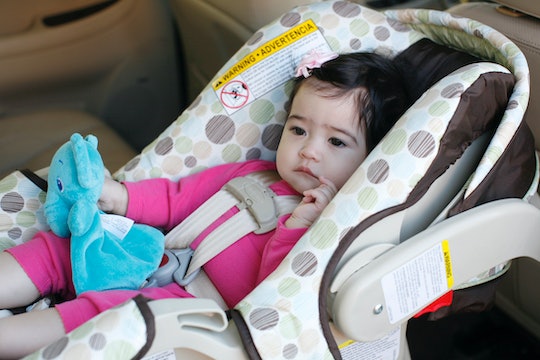 A Baby Almost Died From Being In Her Car Seat For 2 Hours, But What's The Time Limit?

When you are a new parent, you learn to become cognizant of all the safety precautions involved with having a baby. You also quickly realize that your baby’s car seat manual needs to become your new best friend. Installing your car seat and buckling your baby in properly becomes second nature, but you also need to make sure your baby isn’t in there for too long. If you are planning to go on a long drive or excursion, you should know the recommended time limits. So exactly how long should a baby be in a car seat when driving?

Romper reached out to baby expert and Certified Child Passenger Technician Jessica Zablan of the Birth and Baby Company, who says that to avoid any risk of harm to your baby, you should try to take them out of the car seat every hour or so. The American Academy of Pediatrics recommends a guideline of pausing every two hours or so in a car ride. Zablan also suggests that if you are planning on going on a long trip, you should get your car seat inspected by an Child Passenger Safety Technician (CPST) before you go.

Recently, a Scottish family experienced a scare that they hope to use as a warning for other parents. In a report by the Daily Mail, the Clark family described how their newborn daughter almost died due to being in her car seat for nearly two hours. They explained after an hour or so of running errands, the family came home, put their older child to bed, and then took their baby (who seemed to be sleeping peacefully) out of the car seat. Once she was out, she began turning red and blue, so they rushed her to the hospital. Doctors told the parents that their daughter suffered from oxygen deprivation from the long stint in the car seat, and when she was lifted out, the sudden burst of oxygen sent her body into shock. Luckily, the Clarks got their baby to the hospital in time to save her, but Zablan notes that there have been cases when children have died this way.

Zablan says that European car seat standards and rules are different from the U.S., so she couldn’t comment on that particular case, but she stresses on the importance of parents always checking the angle of their car seat. She explains that when a car seat’s angle is off, either from incorrect installation or from being placed flat on the ground, it can cause the baby's head to fall forward and close off their airways. Zablan also explains that it's important to remember that car seats aren’t meant for sleeping and you should never leave your baby unattended in one. The baby in this particular case may have only been in the car for an hour, but the extra hour in the car seat while inside a house could have done some damage as well.

So what if you are going out for a walk in the park or the mall? Many parents find it convenient to use a car seat and stroller set so they can just click their car seat carrier directly into the stroller. Zablan says that she is a firm believer that car seats are meant for cars only. “Yes, it sucks to wake a sleeping baby to put them in the stroller with a fully reclining seat or bassinet, or to carry them in a carrier like Ergo or Tula,” she says, “but typically they should fall right back to sleep once you start moving.”

To make sure your baby is safe, Zablan suggests that babies need to be removed from their car seat hourly, which you will end up doing anyway for feedings and diaper changes, and you should never bottle or breastfeed a baby in a moving car. These precautions, along with making sure your car seat is installed properly, should make car rides safer for your baby, and hopefully keep your mind at ease as well.