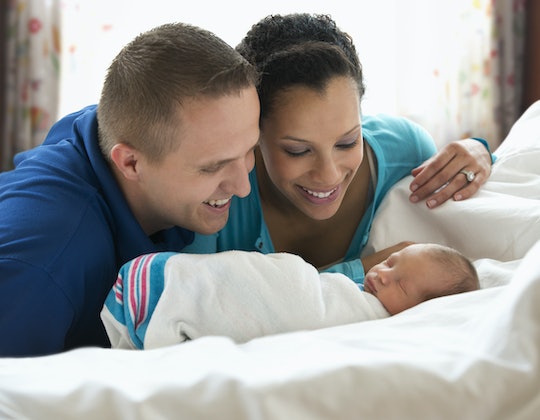 How Long Should A Newborn's Naps Really Be?

Despite what parents may say, newborn babies sleep a lot. After all, learning, developing, and getting used to life outside of the womb takes a lot out of your baby. They depend on those little catnaps throughout the day to help their tiny little brains develop. But how do you know if your baby is getting the right amount of sleep, especially when they can't tell you if they're pooped? Whether you think your baby is sleeping a little too long, or not nearly enough, you may be asking yourself, how long should a newborn's naps really be?

According to Parents, newborns should sleep between 16 and 18 hours daily, including night time sleep and a few naps during the day. Before eight weeks, babies can only keep their eyes open for about an hour at a time before they need to drift off to dreamland again for a couple of hours. But as they grow, the amount of time babies can stay awake gets longer, and they begin to consolidate their naps into a few longer stretches throughout the day, as mentioned on The Precious Little Sleep Site.

As mentioned on Baby Center, most newborns nap between two and four hours at a time throughout the day. By the time they are two months old, babies will begin to consolidate their sleep into between two and four naps each day, which should last between 30 minutes and two hours. By the end of the first year, your baby should take two naps each day, which should last between one and two hours, according to The Precious Little Sleep Site.

Although you don't have to keep your baby's nap schedule down to the minute, you definitely don't want to try to keep him up when he's in need of a few Zs. As mentioned on The Precious Little Sleep Site, you'll know when your baby is overtired if they become too fussy or difficult to soothe. Rubbing his eyes is another good indicator that he is in need of a nap.

As you've probably already discovered, every baby is different, which makes it almost impossible to know exactly when your child's sleep schedule will resemble that of a normal human being. But there are ways you can help your little one develop healthy sleep habits in the first few months of his life. You can begin to teach him the difference between day and night, by keeping your home bright during the daytime and using the time he's awake during the day to play. At night, simply feed and change him in the dark without doing a lot of talking, as suggested by Baby Center.

Most importantly, remember to have patience throughout the process. Even when you think you've got your baby on a good sleep schedule, things like teething, illness, and even overnight guests can turn your schedule on it's head. But if you can make it through the first few months, you can handle anything.