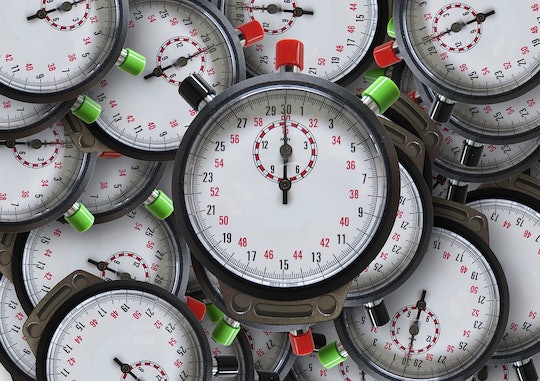 How Long Should Sex Last, According To Science?

Determining the perfect amount of time for sex reminds me of Goldilocks choosing which bowl of porridge to eat: it can be too cold, too hot, or just right. If you haven't experienced it yourself, you've heard stories of those passionate encounters that felt like they were over before they began, as well as the tales of the hook-ups that lasted all night. Since it's so common to hear both of these opposite ends of the spectrum, you may wonder how long sex should last — and you will be relieved to know there is a happy medium between the two extremes.

To find that magic number, Penn State researchers went right to the source and contacted members of the Society for Sex Therapy and Research, made up of psychologists, physicians, social workers, and marriage therapists who drew information from their patients. The finding was that the most desirable length of sex is seven to 13 minutes, although participants considered three to seven minutes to be adequate. However, these time periods represent averages of how long people would like sex to last, which raises the question: So how long does sex last on average, anyway? Because what you hope for and what is actually happening, may be two very different things.

According to a study published in the Journal of Sexual Medicine, the average time sex lasts is 5.4 minutes. But as the International Society For Sexual Medicine (ISSM) points out, more than one factor contributes to how long sex lasts between two people. Sex is defined differently for each person, their partner, and needs to factor in personal preferences as well, according to ISSM. While some people prefer a quickie, others want to make sex last for hours — but overall, most people fall somewhere in the middle.

Once you have an idea of how long you want sex to last, experiment to see how close you are to your personal sweet spot. You don't need to watch the clock while getting busy, but you can start and stop that stopwatch function on your phone before and after the deed to get an idea. It doesn't matter if the love isn't lasting as long as you'd like or if things are carrying on for so long you're starting to loose interest — there are techniques to help you find the length of time that you've been hoping for.

When sex is cut too short, it may be due to one of you climaxing too early. To make the lovin' last longer, Cosmopolitan suggested one or both of you reaching orgasm during foreplay, that way the main event will last longer. Since women can have multiple orgasms, it's easier to climax again, even after foreplay. But men need some time between orgasms one and two, so try to plan his first one with enough down time before the two of you knock boots. Trying tricks such as these may help your romp in the sheets last longer than in the past.

But it's it speed you need, your approach is going to be different. If things are taking longer than you'd like, there are some ways you can reach the finish line faster, but still have all the pleasure. According to Women's Health magazine, there are tips for women who want to reach orgasm quicker, all you need to do is try a few to see which work for you. Trying different positions, using sex toys, and being greedy during foreplay are a few ways you can rev your body up for climax before it's time for the featured presentation.

Although science may have you clocked in at 5.4 minutes, sex is not a universal experience, and there is lots of room for customization. The bottom line is making sure and your partner are satisfied for the amount of time that works best for you.