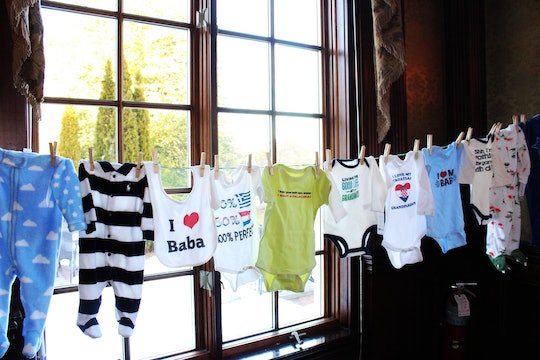 When To Toss Those Tiny (But Cute) Baby Clothes

If you're anything like me, as your babies quickly outgrew their adorable little outfits, you washed out the spit-up, and folded them neatly, and placed them in a box. It could be that you had the hope of using them again for your next child, or maybe you were feeling sentimental and weren't ready to part with them just yet. Now that some time has passed and you realize how many boxes you've accumulated, you might be wondering how long you should keep baby clothes that you have tucked away.

It's common for first-time parents to save all of their baby clothes and gear if they plan to have more kids. Too much of it only gets used for a short period of time, and it seems impractical to buy it all again. But, if you're done having kids, should you continue to hold on to it all?

As a parent of two teenagers, who has spent the better part of the last 16 years lugging and storing large bins of baby clothes through five moves, I can attest that most of these items were not made to be kept forever. In fact, once you know you don't plan to have more kids, you are doing yourself – and the items – a disservice by storing them.

Let me explain. I got pregnant with my daughter exactly two years after having my son. In that time, I had organized all of the clothes he'd outgrown in labeled storage bins in my garage. Once I found out I was having a girl, I went through all of the bins to separate out which items she could use. I was shocked and horrified to find that in just over two years, more than half of the clothes that had looked almost new when I put them away, (some things only worn once) had mysterious yellow and brown stains all along the neckline. His sleepers, sleep gowns, and onesies looked like they had been part of a gruesome crime scene.

I painstakingly soaked, scrubbed, and re-washed every stained item only to find that about a third were not salvageable. I even tried bleaching them, figuring that a faded onesie was better than a onesie in the garbage, but to no avail. I later learned through some parenting message boards that these were protein stains from drool, spit-up, breast milk, and formula that were stuck in the fibers of the clothes. As long as the clothing was being used and washed, the stains were kept at bay. But as soon as they sat unused in a warm space they surfaced and became permanent.

By the time my daughter was born, my sister had handed me down all of my niece's baby clothes. Between that, and what I was given as gifts, it turned out that I only used a handful of my son's items. Wouldn't all of his clothes sitting in boxes have been put to better use by other families? I could have given them away to friends, or even consigned the majority of it while it was still in great condition.

Blogger and simplification expert Andrea Dekker wrote that after seeing a mom of older kids, with very little storage space, move across the country with bins and bins of old baby clothes, (do you know me, Andrea Dekker?) she refused to become emotionally attached to her own daughter's baby clothes. She reasoned that most parents:

There will always be a few keepsake pieces that you'll want to hold onto forever, but you'd be surprised how many pieces you won't even recognize after just a couple of years. If you really love and value your baby's clothing, you should honor them by passing them along to another family who can use them while they're still in good condition.