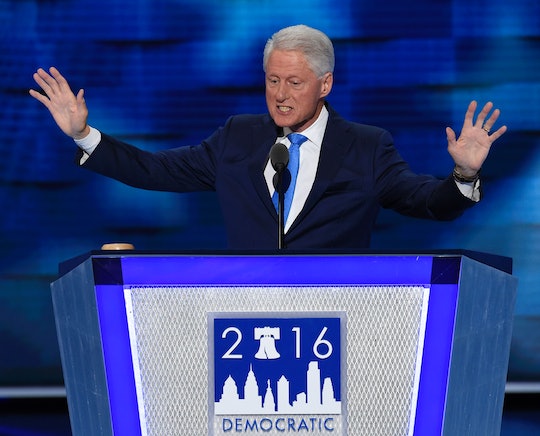 How Long Was Bill Clinton's DNC Speech? Not Nearly As Exhausting As Donald Trump's

Bill Clinton talked for around 45 minutes, and went through what seemed like Hillary Clinton's entire resume, from their meet-cute in the law library at school in the spring of 1971 all the way up until the present day, mixing personal anecdotes about their relationship and family (he had to ask her to marry him three times before she said yes), with stories of her political and activist work. It was by turns deeply humanizing, inspiring, and rambling, with, of course, no mention of the more scandalous moments of their relationship.

Bill Clinton offered a very different version of his wife than the one trotted out at the RNC. He claimed that Republicans had turned her into "a cartoon," and asked how one could square the Hillary Clinton they presented with the one he'd been talking about. "You can't," he answered. "One is real, and one is made up."

And after saying that "life in the real world is complicated and real change is hard and a lot of people even think it's boring," he congratulated the convention audience by saying, "Good for you, because earlier today, you nominated the real one," a sentiment that provoked cheers from the crowd.

Ultimately, Bill Clinton's speech was a call for inclusivity, for kindness, and for positive change. And so even if it had gone on longer than Trump's RNC acceptance speech, in which Trump painted an apocalyptic, hateful, misleading vision of the United States, it would have felt shorter.

But it didn't go longer. The world knows exactly how long Trump's speech was, because he proudly tweeted out a video touting the total speech time, 75 minutes, and the total applause time, 24 minutes, all to the strains of epic-sounding music. The video then included a statistic for the percentage of time spent applauding which, first of all, was mathematically incorrect, and secondly, was so incredibly irrelevant to anything that might make him qualified to run the country.

Bill Clinton presented a vision of a more positive future, one led by an extremely competent and qualified woman instead of a demagogue more likely to make fun of disabled people than to try to empower them. So let him ramble.