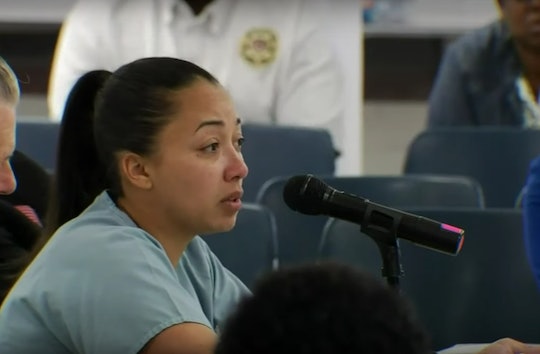 After Spending Nearly Half Her Life In Prison, Cyntoia Brown Has Been Released

A woman sentenced to life for killing a man who'd paid to have sex with her when she was a teenage sex-trafficking victim was released from prison on Wednesday, Aug. 7, seven months after she'd been granted clemency. But how long was Cyntoia Brown in prison? According to the Tennessee Department of Corrections, she served 15 years behind bars.

Brown was arrested in 2004 at the age of 16 and charged with killing a 43-year-old man she alleged had solicited her for sex. Although the court ultimately rejected Brown's story of self defense, sentencing her to life in prison in 2006, court documents reveal that, at the time of the crime, Brown was staying with a man she alleged had forced her into prostitution and was physically, verbally, and sexually abusive.

Interest in Brown's case was renewed in 2017 when celebrities like Rihanna, Cara Delevingne, and Kim Kardashian West began to advocate on her behalf over social media. Then, in early January, then-Tennessee Gov. Bill Haslam granted Brown executive clemency, commuting her life sentence down to 15 years.

"Cyntoia Brown committed, by her own admission, a horrific crime at the age of 16. Yet, imposing a life sentence on a juvenile that would require her to serve at least 51 years before even being eligible for parole consideration is too harsh, especially in light of the extraordinary steps Ms. Brown has taken to rebuild her life," Haslam said in a statement announcing his decision to grant clemency, as BuzzFeed News reported. "Transformation should be accompanied by hope."

According the Tennessee Department of Corrections, Brown was released early Wednesday morning from the Tennessee Prison for Women to parole supervision per Haslam's clemency order. Now 31, Brown has spent nearly half her life behind bars.

Brown's release, however, is not without conditions. According to the Tennessee Department of Corrections, Brown must fully comply with an approved release plan, maintain employment or educational enrollment obtained once paroled, participate in regular counseling sessions, and maintain a regular commitment to community service as conditions of her parole.

According to The New York Times, Brown was described to be a "model prisoner" by supporters. During her time behind bars she is reported to have earned both her high school equivalency diploma and an associated degree from Lipscomb University. According to the paper, she also began pursuing her bachelor's degree.

Brown is also reported to have counseled at-risk youth through the Tennessee's Juvenile Justice System, according to CNN. "She is light years today, as a woman, different from the traumatized 16-year-old that she was," CNN reported Derri Smith, the founder and CEO of the non-profit End Slavery Tennessee, said of Brown in January. "She's mentoring ... troubled youth, working on her college degree, she is planning a nonprofit so she can help other young people."

While Brown has reportedly declined requests to be interviewed immediately following her release, a statement released by her legal team to The New York Times suggests she plans to continue using her experience to help others. According to The New York Times, Brown said in the statement: "I look forward to using my experiences to help other women and girls suffering abuse and exploitation."

More Like This
Can We Fix The One Big Problem With The PTA?
The Worst Fake Babies In The History Of Movies & TV That Will Always Be Unsettling
What Parents Need To Know About Hulu's Predator Prequel Prey
10 Cozy, Romantic, & Drama-Filled Shows To Watch If You Love 'Virgin River'