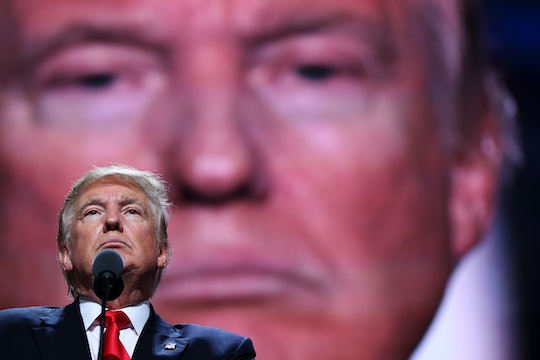 How Long Was Donald Trump’s Republican National Convention Speech? His Speech Went On & On

During the final hours of the final night of the Republican National Convention, Donald Trump formally accepted the Republican presidential nomination with a pretty hefty speech to back it. Many tuned in on Thursday night as Trump concluded the convention, but it’s a good bet that not everyone made it through his entire speech. So, how long was Donald Trump’s Republican National Convention speech from start to finish? Well, it was a long night.

“Friends, delegates and fellow Americans: I humbly and gratefully accept your nomination for the presidency of the United States,” Trump said at roughly 10:20 p.m. EST, carrying on for more than an hour longer to deliver his speech in its entirety. He wrapped things up at about 11:35 p.m. EST, bringing the final time to just about 75 mins.

After the billionaire businessman addressed the crowds, he continued to brag about his Republican primary number — something that wasn't written in the prepared transcript that was leaked by Politico earlier on Thursday.

Many were relieved when it seemed like Trump was nearing the end of his speech, taking to social media to express their disappointed in the lengthy list of his grandiose plans. Some even posted that they even fell asleep during it.

Those who were interested in reading Trump's speech beforehand had ample time to do so and the leaked version didn't stray too far from what he said on stage, but some mentioned his delivery was off point.

At 11:30 p.m. EST, New York Magazine writer Andrew Sullivan said he was "relieved" as Trump finished up. "This was a terrible presentation of what read like a powerful speech," Sullivan wrote on his live blog. "It seems screechy, unmodulated, and yet also plodding. Mussolini never had aTeleprompter."

"To all Americans tonight, in all our cities and towns, I make this promise: We Will Make America Strong Again," Trump concluded his acceptance speech. And perhaps America will feel strong again — after getting some much needed rest.